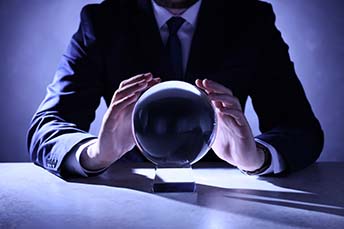 technology
regulatory
profitability
economy
Summary: We interviewed PCBB’s President, Mike Dohren about the key trends he expects CFIs will need to look out for in 2023, including the impact of a slowing economy, the continued rise of disruptive tech, and key regulatory changes.
Share this Article:
The practice of scrying — foretelling the future by analyzing the reflections in water or precious stones like crystals — has been in practice in various cultures since prehistoric times. We have always desired to know what the future has in store for us.Although scrying cannot guarantee what 2023 holds for community financial institutions (CFIs), we can look at historical data and current events to make predictions. That’s exactly what PCBB President Mike Dohren has done. In this follow-up to our 3-part series reflecting on 2022, which recaps lending, talent sourcing, and cybersecurity challenges this past year, he is sharing his thoughts on some of the most important issues likely to affect CFIs in the year ahead, based on current economic indicators, recent events, and likely market forces.Here are the top five factors he expects to impact CFIs in 2023:1. A Slower Economy and Recessionary Concerns
With inflation reaching its highest levels of the past 40Ys, the Fed has implemented a series of aggressive interest rate hikes during 2022 in an attempt to slow the economy and bring inflation under control. Dohren believes various signals — including a cooling labor market and higher unemployment, business contraction, weaker consumer confidence, and reduced housing demand — following the most recent increase suggest that the Fed’s strategy is beginning to have the desired impact on the economy.
Fed Funds interest rates are expected to rise and plateau at around 5.25% in 2023, but Dohren acknowledges that recessionary concerns still persist. “Businesses and consumers alike will continue to feel the pressure, giving rise to a modest increase in unemployment, which will also slow consumer spending — in turn further slowing the US economy,” Dohren predicts. According to KPMG’s global CEO survey, over 80% of top executives surveyed foresee a mild recession in the next 12 months.With that decrease in economic growth, however, comes a downturn in loan growth that CFIs should be aware of. Dohren continues with, “I think a slowing economy and the associated effects on consumer spending and real estate prices may negatively impact growth opportunities and loan production, particularly for those CFIs focused on the CRE market.”2. Pressure on Profitability
While rising interest rates will drive CFIs’ margins over the longer term, Dohren believes the current economic uncertainty and speed of rate increases could put pressure on margins in the short term. He predicts deposits are likely to reprice faster than loans for many CFIs, resulting in higher funding costs, and mortgage refinancing will likely be down. He notes that “with all these moving parts, there is an expectation that institutions’ 2023 earnings will be relatively subdued compared to 2022.”

Dohren also predicts that the excess liquidity of recent times will decline as we head into 2023, with many banks having already experienced a significant change in their liquidity position in H2 2022. “More expensive funding, along with reduced availability, could put further pressure on margins,” he says.3. The Continued Rise of Technology
Given prevailing economic conditions, Dohren expects competition within the sector to increase, with CFIs contending for market share with an ever-growing number of institutions, fintechs, and neobanks. He sees much of this competition being driven by continued digital innovation and technology. These non-bank competitors will likely continue to use technology to disrupt other areas of finance next year, particularly within the lending space, where they are improving efficiencies, online capabilities, and automation.“I think the payments space will continue to evolve at a rapid pace during 2023,” he states. “Significant changes most likely to affect CFIs include the Fed’s rollout of FedNow and the increase in non-bank competitors entering the market. Institutions need to embrace faster payments technologies and solutions to ensure they can respond to their customers’ needs in real time.”

As CFIs are well positioned to offer both in-person and online services, Dohren believes continued investment in technology — and the right partnerships — should help them to stay up to speed with the competition and meet their customers’ changing expectations.4. Persistent Staffing Shortages
Attracting and retaining talent, particularly with tech skills and in metropolitan areas, continues to be a key challenge for CFIs in the wake of the pandemic. Dohren highlights that many institutions are expected to face the added transitional challenge of needing to replace top tier executives and senior employees nearing retirement. He provides a few different tactics to use in order to combat the continued trend of staff shortages.“To recruit the necessary team members,” he states, “institutions should focus on demonstrating their credentials as a good employer, ensuring they offer flexible work options and strong benefits, and instilling a supportive working culture. Having a meaningful purpose beyond profit and making a positive contribution to society are also increasingly important to younger employees. CFIs should leverage the important community role they play as a key differentiator — for both employee and customer engagement.”

5. An Evolving Regulatory Landscape
Given the current economic environment, Dohren expects regulators to focus on interest rate sensitivity, how CFIs are preparing for a potential recession, and making sure they aren’t taking additional risks in their portfolios. Institutions’ cybersecurity is also likely to undergo increased regulatory scrutiny, particularly given the higher prevalence of ransomware and other attacks during an economic downturn.“Regulators will also be looking at the new loan loss reserve CECL methodology for privately held banks for the first time this year,” he adds. “While this is primarily an accounting requirement, it is still a big change for CFIs. Preparation is key.”

In addition to the key forces shaping the CFI landscape discussed above, Dohren suggests that if they are not already doing so, CFIs need to start paying attention to climate change and environmental, social, and governance (ESG) factors. Although the regulatory requirements regarding a CFI’s ESG credentials are still being established, “institutions cannot afford to ignore ESG as a strategic imperative.” This issue is discussed further in this BID article on how to attract new customers with ESG.Despite the economic uncertainty that lies ahead, Dohren believes there are many reasons for CFIs to be positive as they head into 2023. He anticipates relatively low defaults, a comparatively strong credit environment, and the Fed slowing its interest rate increases as a way to relieve margin pressures. “But CFIs will need to make the most of the multitude of opportunities available to them,” he says, “including investing in green and ESG initiatives, undertaking strategic fintech and technology partnerships, exploring new revenue streams beyond their traditional products, and embracing new ways of doing business such as banking as a service and embedded banking.”

Only time will tell how the 2023 economic market will shape up, but you can start the year off on a good foot, if you have a sense of what to expect. Consider how the above trends could affect your CFI, and make sure you have a plan in the works to respond to the most likely developments.
Subscribe to the BID Daily Newsletter to have it delivered by email daily.

Your Trusted Partner from Coast to Coast