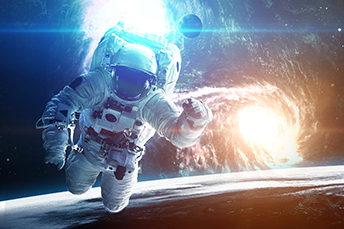 by Steve Brown
technology
digital banking
mobile banking
Summary: The worldwide enterprise wearables market was $3.2B in 2016. Community banks will not be able to totally ignore this technology. What are the developments and how can community banks play in this market?
Share this Article:
Research published in Nature Communications finds oxygen can now be extracted from water in zero gravity using star light and a semiconductor. This amazing discovery seems to provide a way for humans to take long space flights. So, suit up and get ready everyone!
As you think about traveling to distant stars in the future, we bring our community bank readers back down to earth this morning as we delve into how wearable payment devices are gaining traction with some examples and discussion.
Take, for instance, ABN Amro's Kerv payment ring. In early testing of its device, ABN Amro found that 78% of consumers preferred the wearable over debit cards by the end of its pilot testing period. The bank is now rolling the ring out to a larger group of customers, along with other wearable devices including bracelets and watches.
Meanwhile, across the globe in Australia, Bankwest's launch of its Halo payment ring has become extremely popular since it launched in January. The bank didn't even do an advertising campaign, yet the ring become popular among existing and new customers. In fact, about 50% of the rings sold have been to new customers attracted to the bank by the wearable technology.
Here in the US, banks have taken a somewhat different approach by partnering with technology companies instead of producing wearables themselves. JPMorgan Chase has partnered with Fibit Pay and Garmin Pay. Meanwhile, Mastercard and Visa have partnered with NXP Semiconductors on its new mWallet2GO. This end to end offering makes it easier and cheaper for manufacturers to integrate payment capabilities into wearable devices. One company that has already signed on for mWallet 2GO is the luxury brand Montblanc, which is using it within its new TWIN smart watch strap.
Despite some consumer skepticism surrounding wearable payment devices, Allied Market Research predicts that the value of the worldwide enterprise wearables market will increase tenfold and reach $32.4B by 2023. So, it is no surprise that the banking industry is paying close attention to wearable devices.
While most community banks will stay on the sidelines for a while with wearables, it is still good to stay "in the know" with such a high level of expected growth. For those interested in early adoption, the best bet to participate will be to partner perhaps with a technology company heavy in this area.
As consumers become increasingly receptive to wallet-free payment methods, business customers will likely jump on board too. After all, the Apple watch is gaining popularity and often is the first step for many banking customers into the wearables market. Keep your eyes and ears open to the needs of your customers and you will be ready when the time comes for them to start using wearable payment devices.
Subscribe to the BID Daily Newsletter to have it delivered by email daily.

The Cost of M&A
Since a merger might not be the best strategy for every community bank, we provide a brief overview of the current situation and offer a few ways you can grow without it.

Training, Trust And Hedging
Lenders are seeing an increased demand for long-term loans. How can community banks satisfy this demand in a rising rate environment?