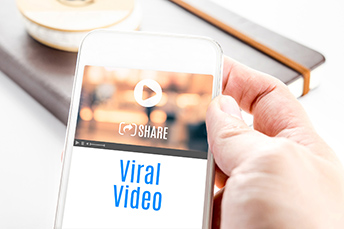 marketing
business customers
Gen Z
Summary: Going viral may only seem relevant for those on TikTok or teenagers, but some community financial institutions could use this marketing tactic to entice the ever-increasing Gen Z bank customer. We highlight how video clips and posts can go viral using popularity, trust, shared identity, and fear factor drivers.
Share this Article:
Contranyms are interesting. They are words that have two almost opposite meanings, depending on how it is used. While you can screen (hide) your skin from the sun using sunblock, when you screen a movie you are putting it on display for everyone to see.

Similarly, when we talk about something going viral, the word is negative when it comes to things like the pandemic, yet when used regarding something on social media or the internet, it is positive. Going viral on social media indicates great demand or a high level of interest. In the case of the latter, there is no shortage of things that have gone viral on social media in recent months — from last year’s release of the filmed version of the Broadway musical Hamilton to Bernie Sanders’ sweater mittens.

Why is this important for community financial institutions?When it comes to generating interest among younger bank customers, online content “going viral” can be impactful. Reaching this audience through viral marketing could be something to test.

Though there is no set formula for what will make something go viral, venture capitalist James Currier, who formerly ran a social networking service, purports to have determined the major psychological drivers based on 150MM service users. If you are interested in trying out viral marketing, here are a few considerations based on Currier’s findings.

Popularity and status. Celebrity and social standing still play a major role in the things that people are most influenced by. From individual products and services to social movements, high-profile individuals, including social influencers, are able to garner millions of dollars for endorsing products. Positioning a product or service as something used by prestigious individuals or as something in high demand often helps generate more interest. For CFIs, this may mean seeking out an endorsement from a well-regarded citizen within your community who is willing to help out without the big commission check.Trust. People tend to socialize the most with like-minded individuals who they trust or whose opinions they value. In turn, when people find products or services that they really like, they will typically recommend them to others within their networks. This is especially true on social media, where word travels fast to a large group. To enhance the likelihood of customers recommending specific services or offerings to their networks, CFIs should make sure to use clear and simple messaging for their offerings that highlights their unique qualities easily, where no extra explanation is needed “to share” or repost. This makes it significantly more likely that people will share them. Adding graphics is a good way to do this.Shared identity. This is another factor that draws people together and helps spur interest in things. People tend to share or discuss things that resonate with others who understand their situation, such as working moms or retirees. CFIs can capitalize on this sentiment by targeting offerings to the unique needs of specific groups, such as products that offer convenience for entrepreneurs that are often time-constrained.Fear factor. Identifying dangerous situations and knowing how to deal with them is something most people want to know. For example, highlight some of the ways that cybercriminals are able to hack into people’s accounts, the concern your institution has for its customers, and the steps it is taking to ward off such occurrences. Illustrating such messages through timely, instructive, but also somewhat humorous videos is one way that CFIs may want to approach this type of marketing. Whether you are ready for viral marketing or not, you have likely experienced it at some point. Going viral is a trend that may be worth at least keeping an eye on, especially as you reach out to younger bank customers in the months to come.
Subscribe to the BID Daily Newsletter to have it delivered by email daily.