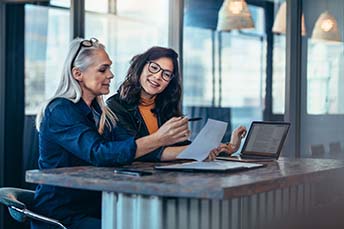 Can You Win Over Younger Employees?

by Steve Brown
human resources
millennials
Summary: In a recent survey, 56% of financial institutions revealed that it is challenging to retain younger talent. We explain why, and how to tackle this situation.
Share this Article:
Maybe it is the fact that about 50% of baby boomers have no retirement savings or maybe it is something else, but a TD Ameritrade survey finds 66% of Americans in their 60s plan to keep working in retirement. At least that is some good news for community financial institutions (CFIs) seeking to keep experienced employees.
That said, another survey by Crowe looked at how well financial institutions are attracting and retaining younger workers, and here there are definitely some issues. It also suggests big challenges could arise if bankers aren't careful to take action now.
In the survey, a total of 778 financial institutions participated. All but 13 had <$5B in assets, and the overwhelming majority had <$1B. Already CFIs reported having issues attracting and keeping workers, with 56% saying retaining younger talent was either somewhat or very challenging.
The results offer a portrait of institutions unable to connect with younger workers and not focused on solving that problem. In fact, only 14% reported having a strategy in place aimed at recruiting younger talent at all.
Financial institutions reported several issues in this area. Lower pay, less flexibility, and less desirable locations were among the most often cited issues. But, these organizations also said business culture was an issue. Financial institutions are often viewed by younger Americans as stodgy and out of touch with younger generations.
Even when financial institutions manage to hire younger workers, they often have trouble retaining them. The survey found that employee turnover rates were especially high for lower-level, non-officer jobs--the jobs that typically go to younger workers. Turnover rates for this group of jobs have more than doubled since 2014, approaching 25%.
The high turnover rate suggests several potential problems: unsatisfactory pay and benefits, ineffective management, unfulfilling jobs, and poor prospects for future advancement. Those are all issues worth taking a second look at in order to attract and retain younger employees.
Other strategies that can help your bank connect with younger workers include such things as:
Make greater use of social media, but not just LinkedIn. Younger generations also heavily use Instagram and Snapchat, so you should consider weaving those into your hiring and retention strategies as well.
Incorporate mobile methods in the hiring process, since mobile is often the avenue of choice for younger workers.
Competitive pay and benefits are also clearly important, and so are engagement and meaningful work.
Connecting with younger workers is an ongoing challenge. But in this competitive market, the more you think about it from their perspective, the better.
Subscribe to the BID Daily Newsletter to have it delivered by email daily.

The Latest Development On Fintechs
The new fast-track bank charters for fintechs just got pushed into the slow lane by a federal judge. Should this change your strategy?

New Capital Leverage Ratio - Opt In Or Out?
In releasing the final rule, the federal regulators said 85% of community banks should be able to qualify for the new CBLR ratio rules. Does this include your bank?