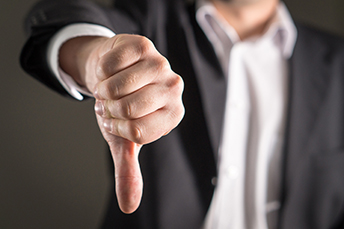 Ensuring Your Mobile App Gets A Thumbs Up

by Steve Brown
technology
digital banking
mobile banking
Summary: A majority of mobile app users expect to be asked for feedback. We look at why this is important and the best ways to do it.
Share this Article:
People are so active online that businesses and banks alike must continue to adapt. For example, research by reviewtrackers.com finds while 53% of customers expect a business to respond to negative reviews within a week, 63% who left such reviews said the business never responded. That is just crazy when you hear 94% of people say a negative online review has convinced them to avoid a business.
Data is easy to get and switching businesses is so easy, you have to wonder whether it is really any surprise that people are doing so more frequently. As people become increasingly reliant on mobile apps, merely having a functional banking app is not enough. This is particularly true as the industry's biggest players continuously add new bells and whistles to their offerings.
Community banks cannot afford to ignore the importance of effective and engaging apps that resonate with customers. That means understanding what customers like and dislike about your app too. One of the most effective ways to do this is to allow feedback within the app itself, instead of pushing them to use email or app rating services.
According to internet monitoring firm StatCounter, mobile internet access surpassed desktop internet access in late 2016 and only continues to become more popular. But, with no shortage of banks offering mobile apps these days, unhappy customers may not bother to take the time to seek out avenues to weigh in with feedback and suggestions; they may instead take drastic measures.
According to the results of a recent study from Apptentive, 51% of mobile app users expect to be asked for feedback from the companies whose mobile apps they use. Of course, not only do customers want to be asked for their feedback, they want to know that the companies they are providing it to are actually paying attention to what they are saying.
Although community bankers are masters of communication, it is worth a reminder to reach out to the customer once feedback is provided. More than 50% of customers willing to provide feedback on mobile apps say they are likely to stop using a company's services, if the feedback they provide is not acknowledged. Unfortunately, this survey found 67% of customers who do provide feedback never get any sort of response. Such acknowledgement can be as simple as an automated message thanking them for taking the time to provide it.
Of course, more personalized communication definitely carries more weight. This acknowledgement of feedback should be done in a timely manner as well; customers feel valued with some sort of response within a week.
More than simply thanking a customer, if a bank implements the feedback, there are big rewards to be received. In fact, Apptentive found that if a customer's feedback is in any way implemented, 97% of them are likely to become more loyal to a company. This is a big deal, since we know it is far more costly to acquire new customers than to delight those you already have.
Subscribe to the BID Daily Newsletter to have it delivered by email daily.

Bank Surveys And Technology Priorities
We reviewed bank surveys from Ovum and Promontory Interfinancial, and provide you with the highlights to consider during your strategic planning.

Are You Robbing Effective Time Management?
CEOs have huge demands on their time. A new HBR survey provides some insightful tips for bank executives to help solve the ongoing challenge of effective time management.