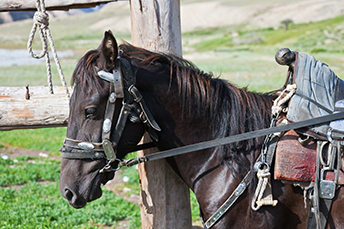 No Horsing Around With Remote Deposit Capture

by Steve Brown Topics: digital banking, small business, technology
Summary: Do your small business customers want to use a remote deposit check service? A recent survey says they might.

You might not believe it but a woman in Florida was arrested by the police for riding her horse on a highway. The issue wasn't that she was riding the horse, but rather that she wasn't doing so on some country road. Compounding matters, she was apparently drunk as she galloped on down the highway. The woman was charged with a DUI and the horse was probably put out to pasture.
In banking, small businesses have been regular visitors to community bank branches since you tied your horse to the hitching post out front. Those days are long gone, however, and a recent survey finds these same small business owners don't really want to come into the branch anymore, when it comes to depositing checks at least.
A recent survey by Aite Group of small businesses found that they would be willing to pay for a remote deposit capture (RDC) service that would eliminate the need to go to the bank to deposit checks. Only 10% said they were not willing at all to pay for such a service. The rest said they were either somewhat willing to very willing to pay for RDC services.
The survey included businesses with annual revenues from as little as $100,000 to as much as $20mm. The results seem to contradict some conventional wisdom about small businesses and checks. Some say small business owners don't mind making regular visits to bank branches to make deposits, and that they are too strapped to pay for RDC. The survey does not seem to support that premise.
As such, community banks may want to consider the survey results and decide how to respond. Apparently small businesses may be more willing than not to pay for the right RDC service, and they have no problem reducing their branch visits. According to another study, small businesses visit banks anywhere from 1x per week to as much as 1x per day to deposit checks.
Certainly, the use of checks overall has been on the decline for decades. The FDIC cleared about 17B checks in 2016, down about 2.5B since 2012. Not too long ago, 40B checks were being cleared annually. Credit cards, debit cards and other non-cash payments (as well as cash usage) are taking over, rising to 144B transactions in 2016, up by 21B since 2012.
For banks looking to transition small business customers to RDC, one of the problems may be the technology itself. Most RDC technology is geared toward big banks and big businesses, and its design is often costly, complicated and unwieldy for the needs of a small business. Some industry research finds up to 64% of banks with < $1B in assets don't have an RDC solution tailored to small businesses and only 4% of smaller institutions offer a small business-focused solution.
It may not be for lack of interest. It appears that many RDC solutions geared toward small business customers are overly complicated. As such, some banks have opted to use consumer solutions for small business customers. There are problems here though; as such solutions are obviously not geared to the specific needs of businesses.
The biggest banks push RDC for small businesses as a safe and secure way to send check images from the business location, so owners can get back to running their business. This approach is effective, so community banks that use it and add a layer of additional personal service might be on to something that not only helps the customer meet their needs, but also addresses the clippety clop noise around this issue.
Subscribe to the BID Daily Newsletter to have it delivered by email daily.

Two economists at the NY Fed point out extreme volatility and high usage of energy are some major drawbacks of virtual currencies. They indicate that "fundamentally, we wonder whether a payment method designed to function where trust in institutions is completely absent can ever be as convenient as one where trust is required, but also already exists" and said a world dominated by digital currencies "would likely translate into massive swings in inflation and economic activity."

Fed KC President George said she believes it is important that the Fed continue to gradually raise rates and that the group currently expects about 3 rate hikes in 2018 and 3 in 2019. Meanwhile, Fed PA President Harker said he is open to a March rate hike, but said the Fed should not move so fast that it inhibits growth. Harker said he has penciled in 2 increases for 2018 with an upside scenario of 3 hikes.