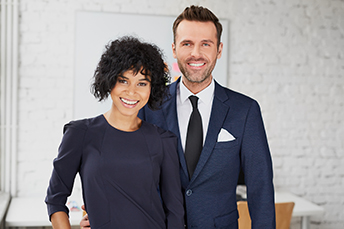 by Steve Brown
marketing
business customers
social media
Summary: Social media audiences have changed. Is your financial institution paying attention?
Share this Article:
Scientists trying to figure out what sort of traits make people more attracted to one another have found that when it comes to faces at least, most people generally prefer: average faces that are either symmetrical or asymmetrical, are familiar and simple. We just found that interesting.
Another interesting thing we want to surface for discussion today revolves around bank usage of social media as a tool for attracting and communicating with younger customers. We bring this up because new research finds people actually using social media and the specific platforms they use could surprise you.
To begin, we look at some of the patterns that emerge to provide helpful insight as to where your financial institution might want to concentrate (or perhaps shift) social media efforts.
A recent study from Edison Research delves into the social media usage of about 223mm Americans. It finds that Facebook has the largest percentage of users at 61% of the 12Y old or older population, with Instagram coming in second at 39%. These are followed by Pinterest (31%), Snapchat (31%), LinkedIn (22%) and Twitter (19%).
But looking at this data in isolation doesn't tell the whole story. So, by digging deeper you can see who is using the various social media platforms to make more informed decisions.
Consider the composition of social media users by age. Facebook users include 39% of those 12 to 34Ys old, 34% between 35 and 54Ys old and 27% are ages 55+. Depending on what you are selling and who you are trying to market to, this can be good to know.
Shifting to LinkedIn and Instagram users, we find for LinkedIn, 37% are in the younger age category, 45% are ages 35-54 and 18% are 55+. In stark contrast, 62% of those who say they use Instagram are ages 12 to 34; 29% are in the 35-to-54-year-old category and 9% are 55+.
Age is one thing, but breaking the data down even further, the study shows significant disparities between social media brand users when divided by both age category and gender too. This is important for financial institutions with limited marketing budgets, because it helps further define your target audience by channel.
Interestingly, many social media brands seem to have lost luster with younger users. Notably, 12 to 34Y olds are using platforms like Facebook, Twitter, Pinterest and LinkedIn less than they were 2Ys ago. Only Instagram seems to have slightly gained ground with this demographic.
What's notable here is that the impetus for many bankers to use social media as a marketing strategy is to reach a younger audience in order to capture new customers. It would seem though, based on the findings of this study, that there is reason to think again. Perhaps younger users aren't as enthralled with certain types of social media as they once were, or maybe they are just taking a group break, but clearly a shift has occurred.
The takeaway is to stay on top of the sites used most heavily by customers across various demographics or other categories, so you can constantly tinker and adjust your social media activities accordingly. After all, nothing is as fickle as the changing whims of the youngest customers.
Subscribe to the BID Daily Newsletter to have it delivered by email daily.

Leveraging Customer Data to Increase Profitability
CFIs would do well to collect and analyze data on customer behaviors and spending habits — not only from their own systems, but also online portals and apps, as well as their partners’ APIs in an open banking model. We discuss some opportunities.