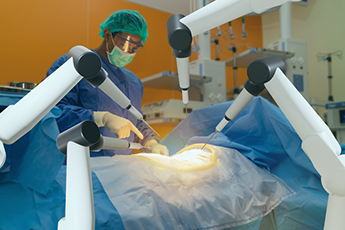 Externships Provide a Way to Plug IT Skill Shortages Remotely

human resources
employees
Summary: As CFIs seek to plug gaps within their IT skill sets, externships provide a novel approach to supplementing expertise, identifying promising technology offerings, and recruiting qualified young employees.
Share this Article:
Robotic surgery has become so sophisticated and precise that doctors can now operate on patients from the next room, or even in remote locations. XACT Robotics recently received FDA approval for a miniature device that will enable surgeons to conduct procedures such as biopsies from outside the operating room, which will reduce the amount of radiation that doctors are exposed to.In the same way that surgeons have begun embracing the ability to conduct operations remotely, some financial institutions (FIs) are adopting externships as a means of supplementing technology shortfalls within their staffs.Externships Vs. Internships

FIs and other organizations have long been offering internships — short-term work stints that provide college students or recent graduates with real-world experience within a particular industry to determine if they are interested in pursuing a career within that field. While some internships are paid, many are not, and instead count toward college credit. For students, the greatest value of an internship is the experience and the connections that can be made within the business and industry where they are interning. Businesses benefit both from the ability to temporarily fill out their workforce and to try out potential future employees without a hiring commitment.While internships remain popular, the shift to remote and hybrid work arrangements has led many FIs to embrace what have been dubbed “externships”. These roles are essentially remote apprenticeships where students shadow professionals, but do not actually perform job-related functions. Externships usually last between six and eight weeks, for roughly 10 hours per week, and participants typically receive an educational stipend upon completion. The biggest difference between internships and externships, however, is what participants are able to learn. Since externs are not hands-on, they are able to observe and discuss real business problems, unlike interns, who are often relegated to busywork or menial tasks due to limited availability of mentors.How to Use Externs

Given that externships provide participants with a more detailed look at the real operations of a business, FIs have begun embracing externs as a way of gaining insight into younger demographics regarding product development and new ways of conducting business. For example, HSBC Bank has paired with extern facilitator Paragon One to attract externs with significant technology savvy. HSBC externs are tasked with researching which new bank offerings and solutions customers are likely to embrace in the near future, as well as how emerging technologies could help the bank to improve its overall operations. In particular, HSBC is tapping students with strong Web3 skills, or an interest in learning the next blockchain-based iteration of the internet, and they aren’t the only ones after this group.The Benefits of ExternsAs organizations continue struggling to find qualified IT specialists, externships not only provide an opportunity for FIs to temporarily bolster their IT departments, but also to woo a more diverse group of hiring candidates and make their transition to employee status easy. Externs that convert to full-time employees will benefit from an in-depth look at the organizations they are joining in advance, reducing the chance of poor matches. Externs hired by these FIs who become employees will be able to hit the ground running. Roughly 45% of externs at Fortune 1000 companies turn into permanent employees.Externships are also a good way to enhance the diversity, equity, and inclusion (DEI) efforts of organizations. According to Paragon One, 77% of the organization’s interns are minorities, 54% are women, and 15% identify as LGBTQ+. The remote nature of externships also allows organizations to cast a wider geographic net, with Paragon One’s extern pool currently pulling from more than 100 countries.Community financial institutions interested in an externship program can not only benefit from the ability to tap into remote talent for high-demand roles, but can also reap rewards strategically. With externs, your team has extra pairs of eyes and ears to help your leadership stay abreast of what competitors offer and how you might expand your offerings to customers. If your organization does decide to pursue an extern program, be sure to look far and wide for the best candidates. You might even discover externs who become a permanent part of your team.
Subscribe to the BID Daily Newsletter to have it delivered by email daily.

Join Our Team — We Are Hiring

Are you or someone you know passionate about banking and helping others in the industry succeed? At PCBB, we continually seek to build a diverse team that is passionate about helping bankers. PCBB has career opportunities available in hedging and more. Visit our careers page and start your career with us today!