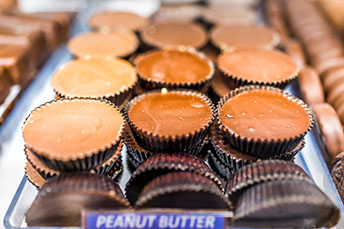 Partnerships May Be Key to Affordable 401(k) Offerings for SMEs

small business
human resources
employees
Summary: As SMEs seek to attract and retain employees by offering enhanced benefits such as 401(k) plans, financial institutions predict major growth in this business line. Some CFIs have already begun partnering with retirement service providers to put together affordable and streamlined offerings.
Share this Article:
Reese’s Peanut Butter Cups have been around since the 1920s, when they were created by H.B. Reese, a foreman for Milton Hershey’s chocolate company. Though he made other candies, the peanut butter cups became his most popular product. After Hershey bought Reese’s company, they launched a series of commercials where one person carrying chocolate would crash into someone else with peanut butter and the ingredients would mix. After sampling the combination, the pair would comment on the amazing taste, followed by the slogan “Two great tastes that taste great together!”As evidenced by Reese’s Peanut Butter Cups’ longtime standing as a popular candy in the US, some things are just better when paired together. A few financial institutions believe that may be the case with banks and retirement services providers in assisting small and mid-sized enterprises (SMEs) with 401(k) plans.Growing Opportunity. As SMEs struggle to attract and retain employees amid an ongoing tight labor market, one way many organizations are attempting to differentiate themselves and make their businesses more appealing to workers is by enhancing their benefit offerings, particularly retirement vehicles such as 401(k) plans. As a result, many SMEs are looking to offer retirement benefits to employees for the first time, creating an attractive business opportunity for financial institutions.Financial difficulties that the pandemic created for many people, coupled with inflation and widespread fears of a recession — or even a depression — have led to a shift in the things people value most from their employers and an enhanced focus on saving for retirement. Fidelity Investments found that 57% of people who use retirement plans sponsored by an employer would rather have larger employee match contributions to their individual portfolios than extra time off. This reality has not been lost on employers. A recent report by HR and actuarial consulting firm WTW found that 55% of employers are bracing for challenges in attracting and retaining employees over the next couple of years, with 35% of those businesses hoping to combat the problem by differentiating their defined contribution plans from those offered by their peers.In addition to a greater focus on savings among employees, larger government tax credits available for small businesses that add retirement plans to their benefits packages have also been a driver of heightened interest in 401(k) plans for SMEs. The 2019 passage of the Setting Every Community Up for Retirement Enhancement (SECURE) Act reimburses SMEs for up to 50% of the costs of implementing new retirement benefits for employees for three years, up to a maximum $5K per year. In June, the US House of Representatives passed the Securing a Strong Retirement Act of 2022, which would increase coverage of implementation costs for new retirement plans at SMEs to 100%, up to $5K per year, with an additional credit for contributions made on behalf of individual employees up to $1K over five years. While it remains unclear when, or how, the Senate will pass similar measures under its proposed Enhancing American Retirement Now (EARN) Act, there is good reason for financial institutions to be optimistic about ongoing SME interest in retirement plans.Better Together. With a growing number of SMEs looking to implement 401(k) plans, a handful of financial institutions have already begun offering such services through partnerships with retirement service providers.
Partnering with retirement service providers enables financial institutions to provide 401(k) solutions that include support resources for SMEs without the need to further tax their own employees. This approach also enables SMEs to offer sophisticated technology offerings without having to build them from scratch.With interest in 401(k) plan services rising among SMEs and several banks already marketing such offerings, CFIs would be well served to examine the viability of adding such programs to their own offerings, particularly since partnerships with retirement services providers can make doing so a manageable proposition.
Subscribe to the BID Daily Newsletter to have it delivered by email daily.