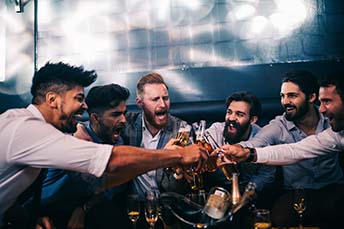 Preparing for the Possibility of Stagflation

economy
leadership
management
Summary: Economists predict that global stagflation could hit before the end of 2022. Now is the time for CFIs to determine what risks stagflation could create for their organizations and identify steps to minimize any negative impact. We offer three actions to consider as the potential of stagflation looms large.
Share this Article:
Stag parties — the British term for bachelor parties — are believed to trace their origin to 5th century B.C. when the ancient Spartans would hold a dinner to honor a man on his last night as a bachelor. While pre-wedding celebrations have become a rite of passage for single men preparing to tie the knot, the origin of the term stag party remains unclear. One thought is that the meaning of the word stag was eventually broadened beyond male deer to represent males as a whole.Beyond films such as “Bachelor Party Vegas,” where the party planner turns out to be a bank robber, there aren’t any obvious ties between financial institutions and stag parties. Stagflation, on the other hand, has a very real tie to the financial world, which experts predict could play out before the end of 2022.The 411 on stagflation. When high inflation, a low — or no-growth economy, and high unemployment combine, the resulting conditions are known as stagflation. The term, said to have been coined by British Parliamentarian Iain Macleod in the 1960s, first saw widespread usage among economists during the global oil crises of the 1970s. Despite periods of inflation and recessions in the years since, there has yet to be a recurrence of stagflation. But now there are fears that could soon change, if the country moves into a recession before the Federal Reserve’s interest rate hikes can tame inflation adequately.According to a recent survey from the Securities Industry and Financial Markets Association (SIFMA), 80% of economists view stagflation as one of the biggest long-term risks facing the current economy, greater even than fears of deflation. Similarly, a survey of global fund managers conducted by Bank of America found that fears of stagflation are at their highest since June 2008. “Just over two years after COVID-19 caused the deepest global recession since World War II, the world economy is again in danger. This time, it is facing high inflation and slow growth simultaneously. Even if a global recession is averted, the pain of stagflation could persist for several years, with potentially destabilizing consequences for low -and middle-income economies -unless major supply increases are achieved,” wrote David Malpass, president of the World Bank Group, in a recent blog post.Planning for the worst. Whether or not stagflation comes to fruition, community financial institutions (CFIs) should be preparing for the possibility. While rising interest rates will benefit CFIs in the long term, they also have a downside. With the Fed expected to continue inching rates upwards, amid ongoing inflation, shrinkflation, and market turbulence, there are expectations that consumers will begin to seriously feel the squeeze, if they haven’t already. In particular, economists predict that financial institutions could see the fallout in lending portfolios, particularly with student loan and mortgage forbearance having now run the course in most states. Now is the time for CFIs to begin stress testing loan portfolios to determine which loans are most likely to be at risk as consumers struggle with the current economic environment.Here are three things CFIs should consider doing as the potential of stagflation looms large:
Even if fears of stagflation ultimately prove fruitless, nobody ever regrets being overprepared for the worst-case scenario. Take the time to check with your customers, stress test your loan portfolio, and make sure your CFI has as much information available as possible so you can make informed decisions, should stagflation become reality.
Subscribe to the BID Daily Newsletter to have it delivered by email daily.