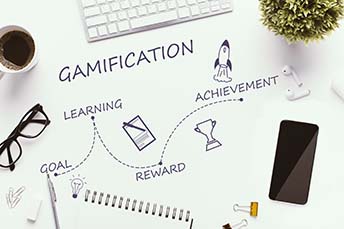 Can Playing Games at Work Make You More Engaged?

technology
customer experience
augmented reality
apps
Summary: Community financial institutions (CFIs) can increase the engagement of both customers and employees through gamification — rewarding people for completing educational training or tasks via “games.” The results can significantly boost the bottom line as well. We take a look at some examples of gamification strategies CFIs are using to attract and engage new customers and employees.
Share this Article:
One of the most addicting games of all time is Pokémon Go. Launched in 2016, the augmented reality mobile game is downloaded onto smartphones, and then players use GPS to find and capture virtual Pokémon creatures that are overlaid on real-world locations. Players then train the creatures to battle other Pokémon under the control of other players. Players collectively have now walked more than 4.3B miles — around the world several times, or past Pluto. Pokémon Go Fests are routinely held, with the latest one being this July in Seattle, attended by thousands.Games can be so addicting that many businesses are now launching gaming apps to attract and engage more customers or train employees on necessary skills or tasks — and more and more community financial institutions (CFIs) are also getting into the act. The idea revolves around the concept of “gamification” — leveraging game psychology to motivate behavior and reach for the next level of rewards.Indeed, whether it’s to engage customers or employees, companies that utilize gamification are seven times more profitable than those that do not, according to research by Zippia. One reason why: 90% of employees say gamification makes them more productive at work.Here are three ways that CFIs are employing gamification:
Whether it’s employees or customers your CFI is trying to engage, gamification is a proven tool. It’s not only effective to incentivize customers to gain financial literacy or to increase employee reporting on cybersecurity risks, but it can be used for non-financial activities as well. As long as the reward you offer through your app connects back to your services or company, it’s a pretty fool-proof way to help reach your institution’s goals!
Subscribe to the BID Daily Newsletter to have it delivered by email daily.