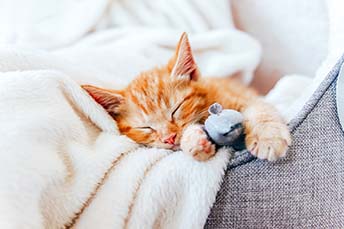 Looking to the Past for Lessons on Weathering a Recession

by Steve Brown
economy
leadership
management
Summary: Economists predict that a recession is on the horizon. Given the difficulties that many CFIs experienced during the last recession, now is the perfect time to look at some of the tactics used by those that prevailed in the last recession.
Share this Article:
When Joe and Leanna Drnec moved from California to Tennessee in 2015, one thing missing from their belongings was their cat Ebi, who had disappeared earlier in the year after wandering off and was never found. Then, seven years later, the Drnec’s received a call that Ebi had been found after someone dropped her at a pet shelter. Technicians were able to pull the family’s contact information from the subcutaneous microchip she had been implanted with. A few phone calls and one flight later, Ebi was returned to her owners and has since taken up residency in her new Tennessee home.Since microchipping of pets began in 1989, countless animals thought to have been lost forever have been reunited with their owners. Unfortunately, not all things that return are as welcome as long, lost pets. Thirteen years after the Great Recession of 2007 – 2009, economists are warning that the US should be bracing for another major recession in the near future. While a recession is never good news, many community financial institutions (CFIs) not only survived the last recession, but weathered it extremely well. So, we thought it would be the perfect time to look at how they did so and what lessons CFIs as a whole should take from the past.Sounding the alarm. In late April, Deutsche Bank became the first bank to predict that the US was heading into a “major recession” due to the Federal Reserve’s efforts to stem inflation. While other banks have since chimed in with similar projections for financial turbulence, expectations for the severity of any sort of financial downturn are varied. Beyond the Fed’s interest rate hikes, other factors include ongoing supply chain issues, the Russia-Ukraine War, ongoing lockdowns in China, and even climate change.Not-so-great expectations. More than 450 US banks failed between 2007 and 2012, according to the Federal Deposit Insurance Corporation. Despite the carnage, however, many CFIs actually weathered the last recession fairly unscathed. As your institution braces for whatever economic downturn is ahead, the following are a few lessons learned by CFIs during the last recession to keep in mind:
While there is no guarantee that adhering to the guidelines above will help your institution cruise through the next recession, the fact that many of these same factors came up time and again among multiple CFIs means they are something that you should at least be aware of and keep at the forefront with your own plans.
Subscribe to the BID Daily Newsletter to have it delivered by email daily.

Six Ways to Make Month-End Close More Efficient
An understaffed or overburdened back-office accounting team means the month-end close can drag on for days or weeks. We provide you with six effective strategies that can help CFIs save time on month-end activities.