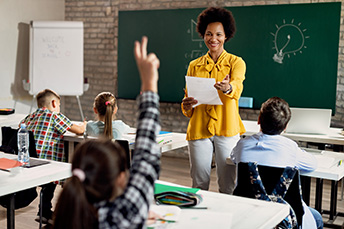 Minority-Owned Businesses Get Support From FIs

lending
business customers
Summary: With 8MM minority-owned businesses in the US, many are having a hard time finding funding. Financial institutions, large and small, are stepping up to help them. While we know that community financial institutions are masters at assisting their communities, we highlight four important ways financial institutions are supporting minority-owned businesses.
Share this Article:
Teachers work hard — on average 10 hours a day and 52 hours per week. Over 92% use their own money for classroom supplies. They are seen as second, only behind military personnel, for their contribution to society. Yet, they earn 14% less than those in other professions with similar levels of education. Since the new school year has started for many children already, we want to remember how much of an impact teachers make. Minority-owned businesses are also making an impact. There are 4MM minority-owned businesses across the country with annual revenue of around $700B. If you include nonemployer firms (those with no employees except the owner), the number of businesses jumps to 8MM. Yet, many have found it difficult to obtain financing from traditional financial institutions and must resort to more expensive lenders to survive. But the tide is turning.  “Over the last year, a number of organizations have awakened to the structural bases of racial inequality,” says Gregory Fairchild, a business professor at the University of Virginia specializing in community development finance. “Whether the recent inflow of funds is a response to this awakening is unknown. What is clear is that it is coming at the right time.”Here are four important ways that financial institutions (FIs) are helping businesses owned by minorities.1. Targeted funds. Similar to the efforts of JPMorgan Chase, TD Bank, Citigroup, and Ally Financial, four community financial institutions (CFIs) in the mid-Atlantic have also launched a fund to further support minority-owned businesses. This $1MM fund is used to offer interest-free loans to minority-owned businesses that have had trouble obtaining traditional financing in the past. These CFIs are also proactively reaching out to entrepreneurs of color, who may have been too intimidated to enter their doors.“We need to go into the churches, physically go into the neighborhoods, take away the barriers, real or perceived,” says the CEO of one of the CFIs. “It takes more than an announcement. It is being involved, building that trust, working within the communities you want to engage — reaching out to the communities first.”The expectation is that this fund will start a relationship with these businesses, which will hopefully turn into a longer-term business relationship with access to larger loans as they grow their business.

2. Investing in minority-owned banks. Large institutions, like Bank of America, JPMorgan Chase, and Wells Fargo, are also stepping up their investments in minority-owned banks. Wells Fargo has invested $50MM in 13 minority depository institutions (MDIs) as a fulfillment of its 2020 commitment. JPMorgan Chase committed $40MM to Black and Latinx-run MDIs. As the CEO of one of these institutions noted, “Public and private firms are recognizing the importance of investing in communities of color and institutions that support economic empowerment.” 3. Investing in minority-focused funds. Several big banks have also invested in funds that specifically focus on minority entrepreneurs. At the beginning of 2021, Bank of America announced its investment of $150MM in 40 different private funds supporting these businesses around the country. Not only that, but many of these funds are also supervised by diverse fund managers. 4. Providing additional support. A CFI in CA offers entrepreneurs of color help with loan applications and access to resources to shepherd the growth of their businesses. This institution also puts them in touch with community-based lending organizations that can offer additional technical assistance and one-on-one support, as well as other financing options like micro business loans. Here are a few ways that FIs are working with minority-owned businesses these days. But, there are others. Many CFIs are doing this as a natural extension of supporting their communities. Because, we all know that when more communities can thrive, the economy flourishes.
Subscribe to the BID Daily Newsletter to have it delivered by email daily.