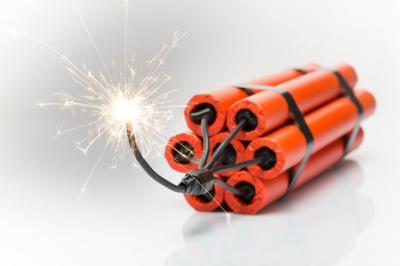 As three Americans were recently honored with the Nobel Prize in physics, we thought we would look at the origins of this impressive acknowledgement. Alfred Nobel, the Swedish scientist who invented dynamite, willed his fortune of $9mm in 1896 to establish awards for those doing work to help mankind in physics, chemistry, medicine, literature and peace. Economics was later added and 585 prizes have been given out since the first award in 1901. It is believed that he had a Nobel had a conscience about the damaging use of dynamite and wanted to leave a gentler legacy. Times of crises can cause many to reflect on how to help others and this is no less true for bankers.
Community banks are deeply invested in their local businesses and economy. So, when natural disasters strike, they most likely will be deeply affected too. Payments on loans suffer almost immediately as borrower's focus first on their families.
In these cases, the FDIC recommends banks follow "reasonable and prudent steps" to assist customers. Suggestions include waiving ATM, overdraft and late fees. Banks should also consider perhaps allowing customers to defer or skip some payments, as well as even delaying the submission of delinquency notices. Banks may also evaluate existing loans to see whether a modification is in order.
During times of such large disruption, electronic banking may temporarily replace some branch activities. Meanwhile, other financial activities could be shifted to other parts of the bank's footprint that might have been spared a given disaster. The overarching goal is to let the community recover its strength and resume its business with banks and that simply takes time.
As we know, Texas, Florida and Puerto Rico (PR) were all hit hard during recent hurricanes. Puerto Rico was probably the most brutally hit, causing major shortages and devastation. Here, it will most likely take years to recover.
As TX and FL dig out and repair, eyes remain keenly focused on Houston in particular. That's because it is the 6th largest US city based on GDP, so a quick recovery is needed to keep the country's overall economic engine humming along. We certainly do not discount any of the areas in FL or PR either, so simply want to point this part out from a purely economic perspective.
In the long term, banks could benefit from the resulting boom of the economy that invariably follows such disasters. Automobiles are being repaired and replaced right now and within the next few years construction and real estate should likely pick up steam in all impacted areas.
To gauge how much, we look at what happened in New Orleans after Katrina. According to Autonomous Research, charge off-rates doubled over the year following the storm, going from 0.2% to 0.4%, but then it improved. Annual deposits for local banks grew from 10% to 30%, and lending activity to rebuild houses developed. That's what TX, FL and PR should expect at a minimum.
Subscribe to the BID Daily Newsletter to have it delivered by email daily.

LinkedIn reports the biggest increase by sector in hiring year-over-year has occurred in oil/energy (+33%) and manufacturing/industrial (+26%).

CECL is one of the biggest challenges for community bankers these days. Our experts are ready to guide you every step of the way through this integration with no software to maintain. Visit here to learn more.
Copyright 2018 PCBB. Information contained herein is based on sources we believe to be reliable, but its accuracy is not guaranteed. Customers should rely on their own outside counsel or accounting firm to address specific circumstances. This document cannot be reproduced or redistributed outside of your institution without the written consent of PCBB.