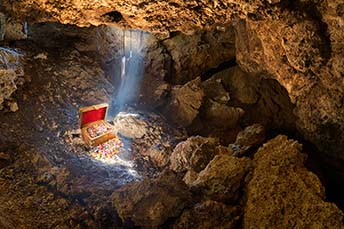 Untapped Markets Right in Your Backyard

industry update
strategic planning
Summary: Underappreciated or undiscovered industry or customer niches can be areas of expansion for CFIs. Here are two banks that are hoping to grow by responding and catering to the specific business needs in their own communities.
Share this Article:
In 2010, writer and art dealer Forest Fenn announced he’d hidden a treasure worth $2MM in the Rocky Mountains, providing only a poem as a clue. Fenn’s treasure was finally found in 2020 after a 25-day search by a medical student from Michigan named Jack Steuf. Speaking of his strenuous journey locating the treasure, Steuf called it “the most frustrating experience of [his] life” and said the moment he discovered it was not a Hollywood ending but that he “felt like [he] had just survived something and was fortunate to come out the other end.”Luckily, finding metaphorical treasures in the financial industry doesn’t typically include long, dangerous journeys through mountains. Sometimes the hunt for something new can turn up a treasure that has been hiding in plain sight: a niche strategy that fits a particular institution at a particular time in a particular place. In other words, the customers you serve in your community are a mix of businesses and individuals that not every community financial institution (CFI) has access to. An effective way to find these opportunities is to dig into untapped or underserved customer demographics in your area and learn the needs of those customers, so you can become the go-to for others with similar needs.When it comes to finding new business customers for this strategy, think about the natural resources around your CFI — is the landscape rural or woodsy or located near water? What types of goods are commonly produced in your area? Are there any key industries your CFI tends to serve often, that you could develop specialized services for? Here are two examples of CFIs whose answers to those questions opened huge potential to meet local industries’ financial needs.1. Oil and Gas Industry & SouthWest BankDue to public pressure and elevated risk in providing financing to the fossil fuel industry, many of the biggest banks in the world have pledged to reduce their support for fossil fuel businesses. According to one study, the largest lenders to oil and gas are the top four banks in the US, led by J.P. Morgan Chase. So far, pledges to work on reducing global warming have resulted in only a modest retreat from oil and gas by banks, but that could accelerate. SouthWest Bank of Odessa, Texas intends to be ready to lend to the fossil fuel industry when that acceleration occurs.The demand for oil and gas, however, is still strong and expected to remain so in the short-term: the U.S. Department of Labor reported that energy prices skyrocketed 60% in June YoY, due to demand exceeding supply. SouthWest Bank should know: it sits smack in the middle of the Texas oil patch and thus has a deep understanding of the industry and the players.SouthWest Bank created a new oil and gas division to cater to those businesses, where larger banks may have started backing out. Even if there will be long-term reductions in fossil fuel use, the industry may still be very profitable for a CFI in the middle of the action.2. Agriculture Industry & Walden Mutual BankNew bank launches have become rather rare in recent years, pinched by an overabundance of branches and difficulty raising capital. The rarest of the rare, though, is the mutual bank, an older banking model where the institution is owned and run by depositors. There hasn’t been a new one launched in half a century, as the model was eclipsed by the more efficient method of raising capital from larger investors.Walden Mutual in Concord, New Hampshire has received conditional approval for a mutual bank charter and is now raising capital. It hopes to open its doors in late 2022.Walden Mutual is something of an outlier: a niche within a niche. The CEO’s idea for the mutual bank came from personal experience as a founder of Walden Local Meat Co. He sees the mutual bank model as compatible with Walden Mutual’s strategy to focus on food and agriculture in New Hampshire and other New England states, with an emphasis on sustainable, organic offerings. When your aim is to finance the production of wholesome and organic food, it might be logical to use a mutual bank business model that echoes the community-spirited ethos of the organic movement.Although it will take some time before it becomes evident if these two market niche strategies are profitable moves, Walden Mutual and SouthWest Bank exemplify the idea that underappreciated niches are places for CFIs to find market opportunities and to differentiate themselves from the pack.As a CFI, becoming even more involved in the community and building your business strategy based on who your customers are is a very encouraging strategy for prospective customers to see.
Subscribe to the BID Daily Newsletter to have it delivered by email daily.

State of the European Payment Initiative
The European Payments Initiative is moving forward and is poised to change the global banking landscape if it is successful. We discuss what those changes look like and how they could affect US financial institutions.