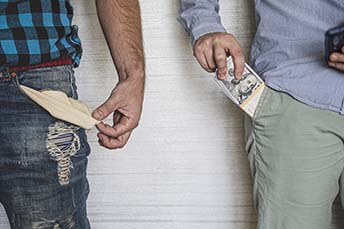 by Steve Brown
interest rate swap
hedging solution
hedging
business customers
Summary: This past spring, the US bond market flashed a key recession warning with the yield curve briefly inverted and short-term debt paying more than longer-term loans. No one can know for sure when the next economic recession will begin, but CFIs may be able to take advantage of two potential opportunities that the inverted yield curve offers.
Share this Article:
“The Prince and the Pauper” is a famous classic by Mark Twain that shows what can happen when two boys who look uncannily alike but are from starkly different circumstances swap clothes and then experience each other's lives. The prince, Edward Tudor, learns the value of being a merciful leader after experiencing the life of commoners, particularly the penniless. The pauper, Tom Candy, learns that he is indeed very valuable to society for his innate intelligence and genuine heartedness — and is rewarded by becoming the “King’s Ward” after Edward is crowned King of England.Swaps can be very valuable indeed, particularly in the financial world.

The US bond market, where many community financial institutions (CFIs) are invested, flashed a key recession warning this spring: the yield curve briefly inverted, with short-term debt paying more than longer-term loans. In this instance, two-year debt had a higher yield than ten-year debt.
In the past, an inverted yield curve has often been an early predictor of a coming recession. But the correlation has grown weaker over the past two economic cycles. In the current instance, the curve may be inverted because the yield on two-year debt is rising at a faster pace in response to the Federal Reserve’s aggressive tightening of monetary policy.Multiple factors shape yield curves.

Both short— and long-term considerations determine the shape of the yield curve. In the current environment, a mix of economic and geopolitical events have nudged short-term interest rates up, while slowing down the momentum of increases in long-term rates.Fed rate hikes are the big factor in this occurrence of an inverted yield curve. In 2020, the Fed cut its overnight rate to near zero, as part of an effort to limit the COVID-19 pandemic’s effects on the economy. Now, however, the Fed has begun to raise its benchmark rate to counter the effects of runaway inflation. The Federal Reserve’s current dot plot (used for signaling the Fed’s outlook for the path of interest rates), shows the median year-end projection for the Fed Funds rate moved up to 3.4%. The estimate for the end of 2023 was boosted to near 3.8%.When the Fed raises rates, other rates typically go up as well. But the increase can sometimes combine with other economic factors to have counteracting effects on different terms along the yield curve. Right now, short-term bond yields are increasing, but longer-term bond yields haven’t gone up by much. That’s because strong international demand for US Treasury bonds, plus quantitative easing, has made longer-term bonds relatively more expensive — and pushed their yields down.An inverted yield curve brings opportunities.

No one can know for sure when the next economic recession will begin. But financial institutions may be able to take advantage of two potential opportunities that the inverted yield curve offers.1. The first opportunity is in buying bonds. When the yield curve is in its usual upwards sloping shape, investors earn lower yields for short-term debt and higher yields for longer-term bonds.In an environment of rising interest rates, bond buyers have to choose between longer-term debt, which carries a better yield, and shorter-term debt, which yields less but gives a buy-and-hold investor more opportunities to purchase newly issued bonds at higher rates. But when the yield is inverted, bond buyers get the best of both worlds: higher yields, as well as more opportunities to buy new bonds as rates rise.2. The second opportunity is a chance to hedge floating-rate debt with an interest-rate swap. Any time investors use an interest-rate swap hedge, they have to consider whether the value of locking in an interest rate justifies the cost of the swap.
With an inverted yield curve, however, investors can have the best of both worlds. They can lock in a swap rate that’s less than the rate short-term bonds are paying, while also giving themselves longer-term certainty of debt payments with a stabilized interest expense.Loan hedging can give your institution a competitive advantage. Do you know about PCBB’s interest rate swap/loan hedging solution ? With Borrower’s Loan Protection, you can protect your institution from interest rate risk and win new business without derivative accounting or complicated documents, and no swaps on your books to process. It’s a simple, well-designed solution. Customers will get the long-term, fixed-rate payment structure they want, while your institution receives a floating rate over the full term of the hedged loan. Check it out today!
Subscribe to the BID Daily Newsletter to have it delivered by email daily.

Automating the Back Office is Critical, Too
Don't just automate tasks to make your customers' lives easier — automate your institution’s back-office operations as well. Not only will you create more efficiencies, reduce errors and save costs, but you will also free up your employees for higher-level tasks. You can also better coordinate with the sophisticated automated solutions you’re offering to customers. We delve further and offer three tips to get you started.

Why Cloud Computing Adoption is Sky High
Eighty percent of financial institutions plan to move away from mainframes and embrace cloud computing within the next two to five years. From lower costs to greater capabilities, the switch to cloud computing is something CFIs can no longer ignore or leave on the back burner.