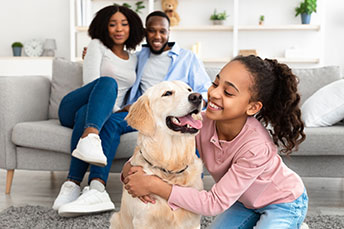 security
customer service
RFID technology
Summary: Radio frequency identification (RFID) is used in retail and manufacturing, but the applications are now reaching the financial industry too. No wonder, Statista puts the RFID technology market at $26.3B in revenue for this year. We explain what RFID technology is, what it can do for community financial institutions, and also report the disadvantages.
Share this Article:
It is well known that stray dogs often follow people home. So, in an effort to increase pet adoptions, Britain’s Battersea Dogs & Cats Home created an advertising campaign mimicking this behavior. When shoppers arrived at a popular mall, they were given RFID-enabled leaflets from Battersea Dogs & Cats. Then, as they walked past multiple electronic billboards throughout the mall, a picture of Barley, the dog, popped up to give the illusion of a dog following them to engage shoppers, bring them into their facility, and adopt a pet. The banking industry is a bit more dog-eat-dog than the pet adoption industry, so it may be a bit more difficult to get customers to follow you into the branch and take out a new loan. But, you never know! These radio frequency identification (RFID) applications are expanding, from interactive billboards to real-time farm animal and equipment tracking to contactless retail shopping. Statista anticipates the RFID technology market revenue will hit $26.3B this year and reach $41.3B in 2025. At first blush, it might seem that RFID technology is not practical for banking, but there are several applications for community financial institutions (CFIs).What is radio frequency identification (RFID)?

This is a type of wireless interaction that uses “electromagnetic or electrostatic coupling in the radio frequency portion of the electromagnetic spectrum to uniquely identify an object, animal or person.” It incorporates a scanning antenna and receiver in the RFID reader and then a tag that has a transponder to communicate with the reader. A signal is sent from the reader to the tag, which then sends back a signal to the reader and is converted into data. Tags can be embedded in labels with a barcode or occur as a device, like a fob. For example, the device that is attached to clothes triggers an alarm through RFID detectors, if it is still attached when leaving the store.Advantages of RFID in financial services

Operational efficiencies. One way that financial institutions have begun using RFID technology is to boost branch efficiencies. This technology has been used to automate processes, such as inventory tracking, by equipping things such as the courier bags used to move documents between branches and processing centers with RFID tags. It has also been used to monitor high turnover inventory, such as cash and checks. But the tags can also be applied to equipment such as PIN Pads, cash sorting machines, and even ATMs, to track when equipment needs to be serviced or when something isn’t working as it should. Compared to barcode tracking of inventory, RFID technology has been found to increase the accuracy of data within branches by up to 90%. Further, RFID has been embraced by some of the banking industry’s largest players, such as Bank of America, which has been relying on RFID tracking for more than a decade as a way of keeping more accurate and efficient tabs on its data centers. The bank credits these RFID tracking efforts for helping it reduce its inventory collection times by 90%, by eliminating time spent on missing assets. Increased security. RFID technology can also be used to enhance security within a branch, by allowing for constant tracking of everything from equipment, such as laptops, to which areas of a branch customers and employees are accessing, such as safe deposit box entries, or even to control the part of a branch that individuals have the authority to access. Providing employees with RFID badges that interact with the locking mechanisms on doors enables financial institutions to limit access to areas with sensitive data or assets. This technology can also monitor employees’ comings and goings, which could be useful in determining employees’ hours, as well as helping with COVID contact tracing. Bolstered customer service. Enhancing the customer service experience for high net worth clients is another use case for RFID. Equipping debit cards with RFID tags can be used as a way to signal when an important customer is entering a branch. This way, frontline employees, as well as the key relationship manager, is ready to service the VIP out of the gate. The RFID tags can even be programmed to pull up an individual’s photo, providing customers with an additional measure of security, in case cards are lost or stolen. Though fewer people are visiting branches in person these days, FIs that have virtual billboards within their branches may want to consider utilizing them in a similar fashion to the Battersea Dogs & Cats Home; banking services and products would appear on the screen tailored to individual customer needs. For all its potential advantages, RFID technology has some disadvantages too. CFIs should keep these in mind before heading down this digital road.Disadvantages of RFID

High cost. RFID technology is still quite new. So, this means that it can be quite expensive. The installation can also be time-consuming to ensure that the signals are received correctly and all cybersecurity elements are buttoned up. Interferences. RFID signals may not occur if certain interferences like metal or liquid are introduced. A metal barrier between the reader and the tag would prevent the flow of information. Also, liquids getting into these devices, like any other electronics, would stop the transmission of data.  Greater cyber risk. As with all new technologies, there is an increased risk for hackers. Precautions need to be put into place, such as lock passwords, which must be sent to the tag before it submits data. Another consideration is one-sided encryption, where the reader encrypts the data to the tag and then decrypts it once it is received back. RFID technology applications are growing, which means the technology will eventually get less expensive and more accessible. Knowing the advantages and disadvantages will help you determine the best decision for your institution today and in the future.
Subscribe to the BID Daily Newsletter to have it delivered by email daily.

How to Prevent Defaulting Loans Despite a Potential Recession
History shows that recessions lead to higher default rates among consumers. By predicting and managing delinquency before it occurs, a CFI can increase the lifetime value of existing customers by helping them avoid becoming delinquent.

Supporting Customers Through the Cost-of-Living Crisis
With inflation reaching a 40Y high this year, the cost of living has risen dramatically. Many banking customers are struggling to keep up with the prices of everyday goods. We discuss how CFIs can support customers through this difficult market.