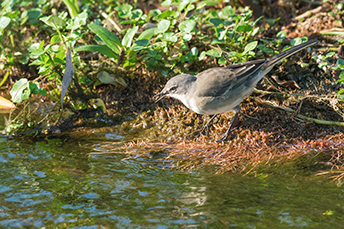 compliance
regulatory
ESG
Summary: The SEC has requested information from financial institutions on their climate risks. SEC Chairman Genzler specifically notes that, “…investors really want…to see climate risk disclosures.” What does this mean for the financial industry? Big banks seem to be complying, while they hope to guide the regulator on the specifics of the information. Yet, community financial institutions hope that they are exempt. We provide you with the latest update to be prepared.
Share this Article:
Climate change isn’t just shrinking the size of glaciers, it is also shrinking the size of certain animals. According to the findings of a 23Y research project by the University of Cape Town, the mountain wagtail bird has gotten lighter as temperatures have risen by up to 33°F over the past century. Based on fossil evidence, scientists were already aware that the size of animals became smaller during previous eras of global warming.

It appears that climate change and size are also related, though inversely, when it comes to the banking industry. Large banks seem to be accepting the Securities and Exchange Commission’s new climate disclosure request, while smaller financial institutions (FIs) are hoping such requirements are voluntary or not required for them. Though no FIs want more regulation and oversight, big banks seem to be accommodating the current Administration’s desire for greater transparency and accountability by businesses regarding climate change. Along with that, several of these large FIs have banded together to work with regulators in an effort to shape these emerging regulations. Meanwhile, the time and money necessary to adhere to such regulations for community financial institutions (CFIs)will be significantly more difficult to bear.  The hope is that such requirements will be limited to the industry’s largest players.Large banks playing ball. Big banks are not without their own concerns regarding the scope of information that the Securities and Exchange Commission (SEC) will ultimately require them to disclose.  However, Bank of America, Citigroup, and Morgan Stanley have promised to monitor and disclose information regarding how their lending activities impact climate change and have already begun providing such details to the SEC. Since these institutions have the manpower to comply with such requests, analysts believe they are doing so willingly in hopes of being able to guide the regulations that the SEC ultimately unveils. Besides the SEC, the investment community is also increasingly asking for this information. So large banks realize that this is the direction things are ultimately moving in.CFIs warn of dire consequences. While the writing may be on the wall regarding the industry’s role in climate change, CFIs don’t have the same infrastructure and resources as their big brethren. CFIs are concerned that the cost of adhering to new regulations will make it even more difficult for them to remain competitive against these larger peers. So, many are pushing to be exempt from any requirements that the SEC implements on this front. In support of these institutions, the Independent Community Bankers of America (ICBA) recently penned a letter to the regulator stating that CFIs should not be forced to provide climate-related data and should instead be asked to do so only voluntarily. The ICBA argued that such requirements would discourage smaller financial institutions from going public and would ultimately harm the investor community. Shaping the landscape. Even as larger financial institutions accept this new oversight, they are pushing for certain reporting limits and are trying to match these requirements with global disclosure requirements that already exist. The American Bankers Association and the Bank Policy Institute have both expressed concerns about the harm that could be caused, if disclosure requirements are too broad. They are asking the SEC to incorporate a safe harbor that would shield financial institutions from lawsuits, if they inadvertently provide misleading information when submitting information to the regulator. Similarly, they are asking the regulator to acknowledge that it may not be possible to provide all the information desired. While we wait to see how the trade association advocacy efforts play out, we hope that the effects on CFIs will be minimal. But, as these guidelines get worked out and finalized, it will be important to have all your ducks in a row.
Subscribe to the BID Daily Newsletter to have it delivered by email daily.

CECL is one of the biggest challenges these days. CECL FIT gives you options to get started simply with a web-based solution that fits your portfolio needs. It includes as much expert assistance you need at no extra cost. Learn more about our CECL FIT today.