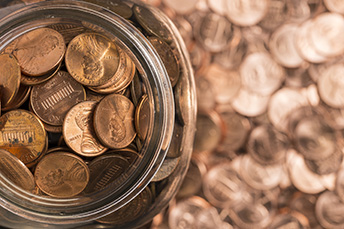 small business
credit cards
mobile wallet
Summary: The pandemic caused many things — a coin shortage was one of them. The residual effects of this shortage are still felt even today. We update you on what the Fed is doing, why coins are still important (even in this increasingly cashless economy), who loses out in a cashless society, and how community financial institutions can help their small business customers adapt.
Share this Article:
Interestingly, there have been six different formulas for pennies. In the early days, they were mainly made of copper. But today, zinc is the main component and the pennies are simply plated in copper.

Pennies, in addition to other coins, were in short supply during the pandemic. People weren’t using cash and the Fed closed down the Mint. Now that things are picking up, is the coin shortage over? Surprisingly, not yet. We give you the details and explain why coins are still important, even as we move closer toward a cashless economy.Coin shortage update

Recently, the Fed issued a notice on “Changes to coin distribution” which went into effect on May 17, 2021. In that notice, it was reported that the demand for nickels increased. Since nickel deposits were small, it caused a need for nickel allocation. The demand for dimes and quarters has also risen higher than the number of deposits at the Fed, so limits have been placed on those coin orders. Even though the US Mint has raised production levels, the high demand coupled with low deposits has led to the current coin shortage.

Despite the growth of cashless, coins are still neededSmall businesses and unbanked. While everyone was pushed to use cashless alternatives during COVID, many businesses and consumers still rely on coins and paper currency. Small businesses, such as local grocery stores, convenience stores, and gas stations, whose margins can’t (or don’t want to) afford the credit card fees, count on cash and coins to stay afloat.Not only that, the unbanked consumer tends to use cash and coins since they have limited or no access to credit cards. In October 2020, the FDIC reported 5.4% of the population (7.1MM households) was unbanked. In order to make purchases online, the unbanked tend to buy gift cards, but that often is to their detriment. After their purchase, they have residual money left on these cards, since purchases aren’t often in even increments of $25, $50, etc. Any leftover balance is often seen as money lost to them.Cashless can lead to more debt. According to Experian’s 2020 Consumer Credit Review, Americans owe an average of $93K in debt, which is an increase of $2,267 from 2019. As we continue further into a cashless economy, that debt could rise even more.Professor Jay Zagorsky of Boston University’s Questrom School of Business explains that there is a “moment of pain” when you have to use cash. But, you don’t experience that same effect with credit cards and mobile wallets. Thus, consumers tend to spend more when using credit cards than they do with cash.How community financial institutions can helpStay up to date. As the US Mint ramps up production to meet increased demand, coins will become more available to those who need them. Stay up-to-date on the Fed’s coin production and its release of specific allocations. The US Mint is expected to hit production levels not seen for the last 20Ys.

Help small business transition. Those small businesses still largely relying on cash could use some financial guidance. A cashless economy appears to be coming, so helping businesses transition to this model will not only prepare them, but give them a chance to thrive. That is good for your business too.
Subscribe to the BID Daily Newsletter to have it delivered by email daily.