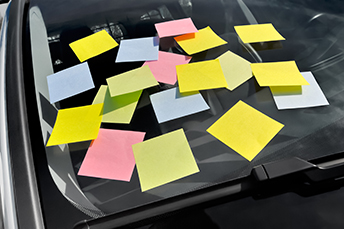 branch banking
branch strategies
employees
Summary: Big banks, such as JPMorgan Chase and Citibank, are returning their employees to the office sooner than expected. We highlight some of their return-to-work challenges as well as learnings to incorporate into your own plans.
Share this Article:
As businesses and banks alike start returning to the office, we found some interesting Post-It note trivia. It takes 5,430 Post-It notes (about 55 packs of 100) to cover a medium-sized car. Apparently, this is a common enough prank that these calculations have been made.

When making calculations of when to return to the office, certain variables need to be considered, such as the number of vaccinated employees, available building space and work stations, technical tools now available, etc. Since the big banks set the pace for much of the financial industry, we highlight their intentions, so you can learn from their endeavors.Big bank plans. JPMorgan Chase recently announced that its US employees will return to the office earlier than expected – in July. While the work arrangements are not full-time from the beginning, the bank’s confidence in bringing people back on site is clear. Citibank also stated that it would bring North American employees back to the office for at least three days a week, starting in July as well. Citigroup’s worldwide head of HR noted, “I cannot picture Citi ever saying we’re going fully remote.” She went on to say that the “default” schedule of the future would likely be hybrid vs. on-site. Additionally, Goldman Sachs seems to have intentions to return employees to the office in mid-June. On the other hand, Wells Fargo has announced that its employees will not return to the office until September and, while the details have yet to be decided, it sounds like they expect to have most return full-time. “We believe most of us benefit by being physically together,” stated the CEO and COO together in a company memo.   Return-to-work challenges. While management may have its plans for a return to work, employees may have another idea, creating some challenges. Accenture surveyed 400 North American financial-services executives and 80% of them said that they prefer for employees to be in the office four to five days post-pandemic. Meanwhile, in a BCG survey, 89% of workers indicate that they would like to work remotely at least some of the time post-pandemic and 42% of remote employees surveyed by Prudential stated they would look for new jobs, if remote work options aren’t available.  Not only that, a labor supply shortage could be happening. Accenture surveyed 500 women in finance in the US and discovered that 29% have left their jobs during the pandemic and an additional 34% are thinking about leaving. These gaps in employer expectations and labor supply could widen, challenging the workplace even further.Mapping your plans to your communities. While it is always good to know what your big brethren are doing, it may not necessarily match the needs of your institution. In fact, several CFIs have already ramped up their on-site presence as their communities have opened up and needed branch support, including a CFI in OH and another one in TN. Others may fully staff their branches soon and offer the services that their customers want, as the economy ramps up. Every CFI is different and knows its customers well. Just because the big banks are going back in a hybrid work schedule, that may not be right for your institution. But, watching them may give you good ideas or learnings. The post-pandemic journey is a new one, so a variety of ideas may help you along the way.
Subscribe to the BID Daily Newsletter to have it delivered by email daily.