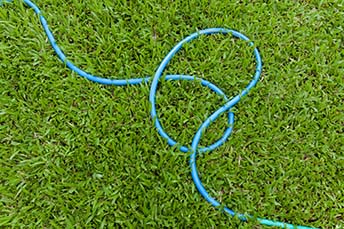 business customers
Ag lending
Summary: Congress passed the Family Farm Relief Act, which extends Chapter 12 bankruptcy to more farmers with greater debts. What does this mean for you and your ag customers?
Share this Article:
Like the kink you can get in a garden hose, Alzheimer's researchers have found an amino acid that pushes out water as people age and forms a sort of molecular zipper that can get a kink. While scientists don't know how to fix it yet, knowing this could lead to breakthroughs.
Farmers also use a lot of water and are good customers of community banks nationwide. This customer base has also taken on near-record levels of debt in recent years. As commodity prices and trade wars put them under additional pressure, bankers are looking at options and closely monitoring things. While new legislation that would let more farmers file for bankruptcy under the more relaxed Chapter 12 might offer relief for some, it could offload more of their financial problems onto community bankers too.
This year Congress passed the Family Farm Relief Act, which extends Chapter 12 bankruptcy to more farmers with greater debts. Chapter 12 bankruptcy was initially created for farmers during the 1980s farming crisis, and is typically an easier path for these borrowers than Chapter 11.
The new law lets farms carry $10mm into Chapter 12 bankruptcy, a substantial increase over the old level of $4.3mm. Not only does the new rule let farmers wipe out more debt, but Chapter 12 is also substantially cheaper than Chapter 11. Filing for Chapter 12 costs as little as $275 for the application fee, while filing Chapter 11 can cost thousands of dollars.
The trade war with China has been particularly hard on many farmers. In the past, China has been the fourth-largest importer of US agricultural products. In 2017, China spent $19.5B on goods from American farms, mostly soybeans, dairy and pork. That number dropped to $9.1B in 2018, according to the American Farm Bureau.
The current administration is paying out around $28B to farmers affected by the trade war, but agriculture is still taking a substantial hit, particularly given chronic overproduction and a series of extreme weather events.
That's reflected in the number of farmers filing for bankruptcy, which has more than doubled over the past 5Ys in the Midwest. Ag producers filed 164 Chapter 12 petitions during Q2 of this year vs. 130 in Q1 and 135 during the same period last year.
The money that banks stand to lose from these filings has also grown. In 2018, the total amount of outstanding loans made through the Farm Credit System, increased by 3.2%. For younger farmers, who are more likely to reorganize than retire, the debt load jumped by 6.2% for the same period. Many community banks have risk exposures here that have increased too.
Total farm debt will likely climb above $420B this year, or within about $4B of where it was in the early 1980s. That is before that decade's farm crisis, according to a July statement from the Department of Agriculture.
We know that many community bankers support farmers and those farmers need your help, so keep all of this in mind as you work through any issues that may surface.
Subscribe to the BID Daily Newsletter to have it delivered by email daily.

Profitability FIT is an outsourced profitability solution that measures performance on both a customer relationship and account basis. Contact us today for more information.