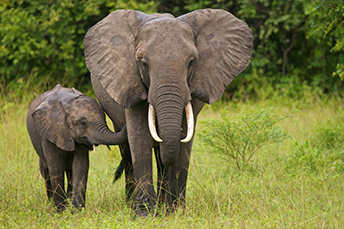 by Steve Brown
compliance
risk management
employees
Summary: The issue of what constitutes age discrimination has been and continues to be adjudicated in the courts and the issue is only likely to percolate more given the overall aging of the entire workforce. We provide some tips to stay compliant.
Share this Article:
Here's a thing. Without looking, which animal weighs more - the elephant or the hippo? If you guessed the elephant give yourself a point. If that one was too easy, we next ask whether the rhinoceros or the giraffe weighs more. Ok, that one is a trick question because the top five in order are: African elephant, Asian elephant, white rhinoceros, giraffe and black rhinoceros. Have fun today as you challenge your lunch mates to this test.
If tests aren't your thing so early in the morning, we note that community banks and all companies can also sometimes be tested by difficult subjects like age discrimination.
Technically speaking, the Age Discrimination in Employment Act of 1967 (ADEA) says age discrimination is the unfair treatment of someone more than 40Ys old due to their age. Also of note, a survey by AARP finds 61% of workers age 45 and older have seen or experienced age discrimination on the job and 91% say they believe such discrimination is common.
This means it is also increasingly common for companies' practices to be called into question. The issue of what constitutes age discrimination has been and continues to be adjudicated in the courts and the issue is only likely to percolate more given the overall aging of the entire workforce. Here, then, are a few concrete things banks can do to help avoid trouble.
Look carefully at your recruiting practices. In April, an age discrimination lawsuit filed against PwC earned class-action status in federal court. Plaintiffs claimed that the firm discriminated against older applicants by recruiting mainly on college campuses and school-affiliated job sites. The outcome of this case could have significant repercussions for banks too, so it's something to watch closely. In the meantime, look out for potential red flags in your own recruiting practices.
For example, banks should be careful when they advertise not to rely solely on social media or local college campuses. This could be construed as discriminating against older workers. Job boards and community centers, which may be more widely used by experienced workers, could be used as well.
Also, in job posts, banks should try to steer clear of words that inherently don't apply to older workers such as "recent graduate" or "digital native." It may be obvious, but when posting job openings it is sensible to include relevant information about work requirements and salary. This way, candidates of all ages have sufficient information to decide whether or not to apply.
Also, banks must be careful not to mistakenly discriminate against older workers in job applications and interviews. Make sure that you don't ask directly or indirectly about age. Candidates no longer need to say when they completed their degree or provide specific years of employment, for example.
It's also important to ensure you accept applications from a range of sources. Consider not only online applications, but also applications that arrive by mail, fax or in-person.
Think about the work environment itself to make sure everyone is treated fairly. We know that this is often the case, but it only takes one unnecessary comment to put your bank at risk.
Of course, the bank's policies should apply fairly to all employees, and these policies should be reviewed and communicated to all employees as frequently as needed.
Subscribe to the BID Daily Newsletter to have it delivered by email daily.

Inquiry & Insight - Leverage, Payments & Social
In our new BID feature, "Inquiry and Insight", we provide questions from readers and bankers and do our best to give you relevant, insightful answers.

Integrating Your Marketing
Have you integrated your digital and nondigital marketing? It may be time.