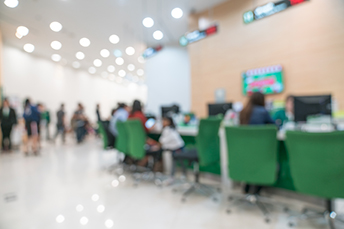 Alternative Data And The Rules

compliance
regulatory
fintechs
Summary: According to a GAO report, small business loans by online lenders grew from about $582mm in 2013 to $4.2B in 2017. We look deeper into this report, specifically around lending activities using alternative data.
Share this Article:
Our community bank readers will likely be interested to know about some research by Deloitte. People were asked the likelihood they would increase their branch usage if specific features were offered by their bank. Those ranking at the top were: extended service hours through virtual remote services with a representative (36%); digital screen self-service with representative help if needed (34%); ability to schedule a personal appointment for a virtual video meeting with a representative (31%); and a branch that resembles a caf? where you can plug in, hang out and work (31%).
As you ponder where to enhance your branch network with technology, we take a look at the sticky issue of partnering with financial technology companies (fintechs) that do lending activities using alternative data.
The GAO issued a recent report and recommended regulators provide guidance to fintechs and banks on these matters. For their part, regulatory agencies have said they plan to address the report's recommendations.
One key area at issue is the extent to which fintech lenders' use of alternative data complies with fair lending laws. Fintech lenders often rely on alternative data to help determine borrowers' creditworthiness. To be clear, alternative data refers to anything not traditionally used by the three national consumer reporting agencies when deciding a person's credit score. This can be financial or non-financial information. The GAO cites the example of two lenders that consider the applicant's educational institution and degree for underwriting or pricing purposes.
The GAO notes that regulators have taken some steps to monitor fintech lenders' use of alternative data. Regulators have also issued more general guidance on these matters and others related to fintechs and banks.
However, the GAO report notes, regulators have not yet provided lenders and banks with specific guidance on the appropriate use of alternative data when underwriting to avoid running afoul of fair lending laws.
Given the industry's growth and the lack of regulatory clarity, the GAO has recommended regulators provide clear, written guidance on the appropriate use of alternative data in the underwriting process. It's unclear when such guidance would be promulgated. But regulatory clarity could help alleviate concerns by both fintechs and banks and encourage future partnerships.
These issues are especially important now given the fast clip at which the online lending industry has been growing over the past few years. According to the GAO report, personal loans provided by online lenders in 2017 totaled about $17.7B, up from about $2.5B in 2013. Moreover, these lenders' small business loans and lines of credit grew from about $582mm in 2013 to $4.2B in 2017, and their student loans and student loan refinancing climbed from roughly $3.4B in 2015 to $7.8B in 2017, the report notes.
For now, banks must ensure they're complying with existing guidance, however general, that relates to the use of alternative data and third-party relationships. Banks that have specific questions or concerns about a particular practice can reach out directly to their regulator for guidance. We'll continue to update you as industry-wide developments occur.
Subscribe to the BID Daily Newsletter to have it delivered by email daily.

Embedded Banking: A Potential Growth Avenue (Part 1 of 2)
Embedded banking could help CFIs expand into new markets, acquire new customers, and increase deposits. While there is huge potential for embedded banking, some CFIs are hesitant to give it a try due to perceived complexity and high cost. In the first of a two-part series, we discuss benefits and trends related to embedded banking.