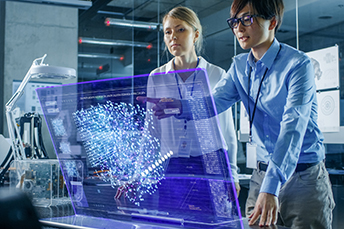 by Steve Brown Topics: biometrics, technology, cybersecurity
Summary: A new report now predicts that in two short years, 1.9B bank customers will be using biometrics to perform a variety of functions. We give you a rundown of the latest in biometrics.

Well, it seems you just cannot get any privacy these days. Researchers appear to have found a way to reveal the contents of a remote screen by using what is known as a side-channel attack. These researchers used machine learning with audio picked up by computer microphones to get sensitive information from the remote screen. The audio was from emissions leakage of the electronic components of the LCD screens. This type of audio eavesdropping goes to show how far machine learning has come!
We are not sure it will help much in this regard, but the world of biometrics has also been expanding quickly. A new report now predicts that in two short years, 1.9B bank customers will be using biometrics to perform several functions, including withdrawing cash from ATMs and identity verification for digital onboarding.
We don't believe our old friend the password is skipping town anytime soon, but it's highly probable that banks' reliance on them will diminish over time. As such, it's important to stay abreast of the recent advances in biometrics and other technologies, so you can always have your finger on the proverbial pulse.
Here are a few recent biometrics-related developments:
Fingerprint scanners. Mastercard has confirmed it is in talks with UK banks about launching cards with fingerprint scanners to authenticate customer identities. The technology is intended to replace the use of PIN codes and speed-up the process of making payments online and in-store. Mastercard's biometric tech is currently being tested in South Africa. Also, earlier this year, Visa announced pilots with Mountain America Credit Union and Bank of Cyprus to test a new biometric payments card that uses similar technology. Finally, Bank of America brought fingerprint and facial recognition to its mobile app, CashPro Mobile.
Palm vein biometric authentication. Unlike fingerprints, vein patterns leave no trace and cannot be copied, the experts say. The credit card unit of Aeon recently announced an upcoming pilot using Fujitsu's palm vein biometric authentication technology. Aeon cardholders won't have to carry cards or smart devices after they register their palm vein pattern to their card. At the register, customers can simply pay by scanning the palm of their hand over a reader. Fiserv also offers Verifast, Palm Authentication technology that integrates Fujitsu palm-vein biometrics. A number of credit unions have recently rolled out this technology.
Iris recognition. Last fall, Britain's TSB introduced iris recognition to its mobile banking app. It was the first bank in Europe to introduce the technology. At the time of the announcement, the bank said iris recognition was the most secure form of biometric authentication currently available, taking advantage of 266 different characteristics vs. 40 for fingerprints. Other banks such as Wells Fargo and Bank of America have also reportedly tested this type of technology, but few other US banks have made this leap yet.
Certainly, no technology is fool proof, as can be seen from our introduction and there will always be crooks able to game the system. That said, we urge bankers to keep monitoring biometrics to stay on top of developments, so you are ready to move, when and if, it makes sense for your bank.
Subscribe to the BID Daily Newsletter to have it delivered by email daily.

Kansas City Fed President George said she expects 2 more rate increases this year based on the economy today. She noted that more rate hikes would likely happen next year as well, to move the interest rate to a neutral point of about 3.0%.

The Commerce Department reports profits at US corporations soared 16% YOY in 2Q, the biggest jump in 6Ys. Tax cuts and booming economic growth drove the increase according to experts.

A survey by Magnify Money finds the top 1% of US households (based on income) have a median savings of $1.1mm across a variety of saving accounts vs. no savings at all for the bottom 20%.

According to a study from Harvard Business School and Georgia State University, only around 30% of the proceeds from a personal loan from a fintech lender ends up repaying debt.
Copyright 2018 PCBB. Information contained herein is based on sources we believe to be reliable, but its accuracy is not guaranteed. Customers should rely on their own outside counsel or accounting firm to address specific circumstances. This document cannot be reproduced or redistributed outside of your institution without the written consent of PCBB.