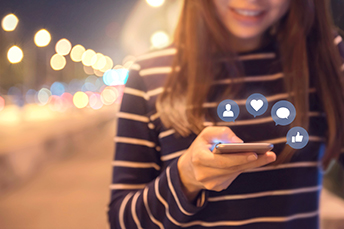 by Steve Brown Topics: digital banking, technology, cyber risk
Summary: Accenture reports that the data many banks base business decisions on is easily manipulated. We provide you with the key takeaways of this report to help ensure your data is reliable.

Earlier this year, Pew Research did some work around social media. Since community banks want to stay connected to customers, we thought you might like to know a few things here. Americans use YouTube (73%) and Facebook (68%) the most, then Instagram (35%), Pinterest (29%), Snapchat (27%), LinkedIn (25%) and Twitter (24%). By age though, younger Americans (18-24Ys) use YouTube (94%), Facebook (80%), Snapchat (78%), Instagram (71%) and Twitter (45%).
As is supported with the above, there's no denying that data has always been an integral part of the banking industry. Unfortunately, as it turns out, the data that many banks rely on may not necessarily be as accurate as one may think.
According to Accenture's "Banking Technology Vision 2018" report, the data that many banks base business decisions on is easily manipulated. Despite that, the majority of banks do not dig into its reliability. Consider that while more than 84% of banks say they rely on data to make more automated and important decisions, 77% say they are not equipped to identify corrupt and/or falsified data. Could banks find themselves making incorrect assumptions or even potentially having compliance issues down the road?
As banks increasingly rely on data from a wide range of third party providers, ensuring the validity of that data is critical. Whether the data comes from government databases, social media platforms, or your own bank databases, being certain of the validity of the data is more important than ever. In fact, the survey found almost half of the banks (44%) said they now have twice the number of partners that they did just 2Ys ago. While most bankers are aware of the importance of accurate data, 28% do not make any effort to certify the data they receive from a strategic third party has not been altered.
Given the reality that data continues to become increasingly important in a digital economy, community banks must continue actively investing in their abilities to collect and manage it. We know this is on your radar, but it is important to acknowledge the risk as well.
Most community banks probably do not have a separate job specifically for a chief data officer, but there should be someone who is responsible for the integrity of all data coming into and leaving the bank to keep up with the increasing digital flow.
One of the most important things to do is to ensure you have the ability to track data you rely on from its origin to the point when you receive it. That way you can make sure it stays clean and pure from end to end.
Another equally important thing to think about around data is to understand exactly how data plays into your decision-making. The more important the decision or the more reliant you are on the underlying data, the more critical it is that it has been cleared for usage throughout the bank.
Be sure to discuss this with your management team and the IT department to confirm you are covered. Now is the time, because the data storm is coming, as social and other areas of the digital arena continue to explode.
Subscribe to the BID Daily Newsletter to have it delivered by email daily.

The Wall Street Journal reports that since 2011, 56 cyberattacks were directed at cryptocurrency exchanges, initial coin offering and other digital currency platforms and those attacks led to hacking-related losses of $1.6B.

Goldman Sachs research finds 10.4% more CIOs surveyed plan to boost spending on security in the coming year, an increase of 10% from six months ago.

Bank of America's CEO reported in his Q2 earnings release that deposits through mobile devices such as smartphones and tablets blew past those made in branches for the first time ever. He also indicated strength in mobile banking has gone "far beyond the millennials" and "spreads across all age cohorts." Community banks should take note of this shift and adjust accordingly perhaps as needed to keep up.