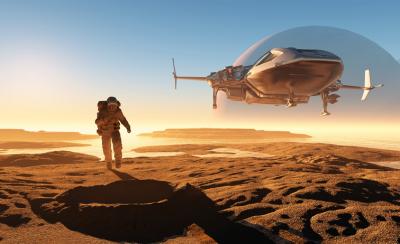 Traveling Around the Industry and Beyond

Did you see the story that quoted renowned theoretical physicist Steven Hawking? He originally said the human race had about 1,000Ys to populate another planet or risk facing extinction, but has now moved that up to a mere 100Ys. He points to overdue asteroid strikes, climate change, epidemics and population growth as likely catalysts. We better get going soon because building a base takes time and we have to account for travel too. Approximate travel times: Moon (3 day trip), Mars (7 months), Venus (15 months), Jupiter (6.0Ys) Mercury (6.5Ys), Saturn (7.0Ys) and Uranus (8.5Ys).
While traveling in outer space is difficult, it is much easier in the banking industry here on earth. Despite a plethora of challenges in recent years, the industry is finally starting to experience some much-needed relief through better return on equity (ROE), improving net interest margin (NIM), and probable tax and regulatory reforms, according to a recent S&P report.
Between rising interest rates, rebounding NIM, improving return on average assets (ROAA) and return on average equity (ROAE), the banking industry already saw a boost in its numbers last year. That is significant because it is the first time since the financial crash of 2008, according to the recently released S&P 2017 US Bank Market Report. Better yet, the S&P report forecasts that this is no blip and community banks are expected to see the benefits of this upswing.
Indeed, NIMs have already rebounded from the lows reached in 2015. Further, S&P expects these margins to expand "substantially" in 2017 and increase by 40bp over the next 5Ys. At the same time, industry ROAA and ROAE are expected to drive as high as 1.15% and 10.34% respectively by 2019. Additionally, new corporate tax reform and loosening regulations under the Trump Administration, are expected to push ROE to more than 12% with many banks, according to S&P.
In more good news, loan growth has actually outpaced that of deposits for the first time since the crisis. This has allowed banks to invest their amassed liquidity and build out their balance sheets. Loan growth was 6.4% in 2015 and 5.3% in 2016, well above the 3.0% average of 2011-2014. Yet, competition is growing ever more competitive and could strain underwriting standards. This is the fear of regulators, which are watching carefully for any indications.
Also notable for community banks, the decrease in return has been the greatest among banks with more than $10B in assets. These banks have seen their median ROAA decrease by more than 30bp since the end of 2005, while those below $1B had the smallest decrease with half that. Similarly, the large banks have seen their ROAE drop by 560bp over the past 11Ys, while banks under $1B have declined about 230bp in the same period.
On a cautionary note, as interest rates rise, deposit rates (betas) will have to rise as well. How quickly is still unknown. Even though there is a smaller percentage of deposits ready to reprice this year than in 2006, (69.1% in 2017 vs. 74.5% in 2006), with the mobility of deposits these days, bankers will have to be ready. The report notes that the beta rate could climb higher than the last tightening. As such, it is important to keep an eye on this and anticipate an elevated cost of funds.
Overall, it seems the industry has recovered and is gathering steam, so there is reason for continuing optimism. However, as we all know the winds can change suddenly so be nimble too. Now is the time for a strong loan portfolio, rigorous risk management and strategic plans for growth (with contingencies built in just in case) to thrive in the coming months. Enjoy the trip.
Subscribe to the BID Daily Newsletter to have it delivered by email daily.

Yields inched up 1bp as investors weighed in on various speeches made by Fed officials.

Xerox research finds 46% of small and medium sized businesses say time is wasted daily at their companies because of paper intensive processes.

CareerBuilder research finds 30% of US workers older than 60Ys say they won't retire until at least 70Ys old and 20% said they don't believe they will ever be able to retire. A lack of retirement savings and uncertainty about how much money they will need in retirement were primary reasons cited.

The Financial Times reports that over the past 10Ys, the amount of student loan debt has climbed 170% to $1.4T. Nationwide, some 44mm people carry an average of $34,000 in student loan debt and 8mm are in default.

Deloitte research finds 51% of companies' surveyed say they are currently in the process of redesigning their organizations for digital business models.

The financial sector is quickly ramping up its usage of virtual assistants, with an Accenture survey finding 85% of executives surveyed said they plan to invest significantly in artificial intelligence over the next 3Ys. As this catches on, call centers are likely to be consolidated.
Copyright 2018 PCBB. Information contained herein is based on sources we believe to be reliable, but its accuracy is not guaranteed. Customers should rely on their own outside counsel or accounting firm to address specific circumstances. This document cannot be reproduced or redistributed outside of your institution without the written consent of PCBB.