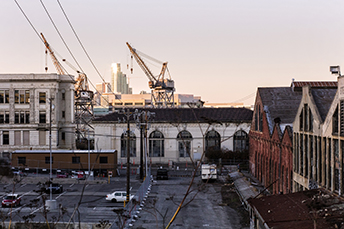 by Steve Brown
regulatory
lending
business customers
Summary: California recently introduced an anti-displacement code of conduct for financial institutions. Here are some of the things you might want to know.
Share this Article:
Gentrification is the term used often to depict the process of affluent people moving into and renovating deteriorated urban areas, while potentially forcing the relocation of established residents and businesses. Today, we focus on the impact of gentrification on commercial real estate (CRE) lending for community banks and how a new code of conduct may affect it.
Fueling the expansion of gentrification, displacement financing, is when a speculator gets a CRE bank loan based on the expectation that rents will increase. Thus, rents are raised and lower income tenants are often evicted, making room for higher income tenants. This is where the issue starts, and banks can get caught in the cross-fire between consumer groups and legislators.
In an effort to ensure that commercial developers are acting ethically for instance, CA recently introduced the California Reinvestment Coalition's (CRC) Anti-Displacement Code of Conduct. It asks banks to commit to avoiding making loans to developers whose business models rely on the eviction of existing residents and businesses to make way for more upscale residents. Of course, this adds expense and political pressure to the banking industry too.
The change came from consumer groups that indicated many areas throughout CA have been turned upside-down by gentrification. This has pushed or priced out many long-time residents and small businesses. This in turn can leave families and small businesses without a home or storefront that they can afford and that adds pressure. Proponents say this has led to the destabilization of local communities, increased homelessness and indirectly created more segregated communities.
One case proponents point out is Oakland, CA. This city has experienced one of the fastest gentrification rates in the country. Homelessness has increased 36% from 2016-2017 and renters must earn nearly 4x the minimum wage to afford median rent in the city.
Since real estate developer customers rely on banks to make development happen, forcing banks to sign a "code of conduct" could effectively make the financial institution the gatekeeper here. Proponents say this would help guard against severe displacement of local renters, homeowners and businesses.
At least 65 community groups and churches in CA have signed on with support and many banks based in the state want to keep the business moving. Many have expressed an interest in supporting policies that would strengthen diversity and growth of their communities, without forcing people out.
The concept has proven popular enough that groups and politicians in other states, like TX, are considering their own "codes of conduct" as well.
The problem is that everything has unintended consequences. This change will add pressure and costs to banks, as some may even need to hire more loan or compliance staff.
There are too many different tracks to review on this one. But, we just wanted to keep you informed and get you thinking in case this topic flows your way.
Subscribe to the BID Daily Newsletter to have it delivered by email daily.