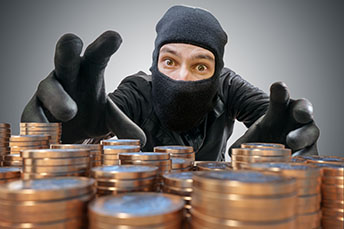 Patrolling the Digital Space Outside the Security Wall

cybersecurity
cyber risk
hacking
Summary: Cyber criminals lurk in a murky digital netherworld just beyond a CFI’s security wall. Knowing how to monitor those cyber spaces can help protect against breaches. We discuss a few growing cyber threats as well as strategies to enhance your CFI’s digital protection to prevent potential attacks.
Share this Article:
In 1997, a security officer at a Dunbar armored car facility masterminded the theft of $18.9MM in cash. It had been the largest cash armed robbery to date. Despite being fired the day before the planned heist, Alan Pace III had somehow retained a key to a side entrance at the facility, making it easy for him and his accomplices to get into the facility. Although all the men involved were eventually caught, the stolen money was never fully recovered — over $10MM of the money is still missing. This goes to show that sometimes, even when the criminal is apprehended, it’s too late to repair the damage they have already done to your financial institution.Flash forward a couple of decades to a banking world that relies heavily on tech. Bank defenses against cyberattacks tend to focus on the final destination of an attack: a bank’s computer system or client accounts that have been breached. But that type of defense is more like a security alarm; it is triggered once the criminal has already gained access, and then it’s a race to stop the intruder before too much damage is done.What if you could spot a potential hacker before the attack occurs? A cyberattack on a bank client often originates in the digital space between clients and bank servers. Attackers are looking for ways to insert their malicious codes into the communication stream between client digital devices and bank websites. So, patrolling that murky digital space around a bank server could offer an extra layer of security.It is important for community financial institutions (CFIs) to understand the various ways cybercrooks can launch attacks. There are a growing number of potential threats that CFIs need to watch for:
Better protection of a CFI’s digital realm and its client accounts requires more attention to a bank’s virtual perimeter. There are several strategies and tactics that can help:
Effective cybersecurity involves more than just erecting barriers and monitoring for break-ins. Stopping a breach before it occurs means patrolling the outer perimeter of a bank’s digital presence and its client accounts. That additional layer of security can help CFIs intervene before critical systems and data are compromised.
Subscribe to the BID Daily Newsletter to have it delivered by email daily.

Thank you for reading the BID and choosing PCBB as a source for important banking information. To help us provide you with the best experience possible, we invite you to take a quick 3-5-minute survey to provide us feedback.