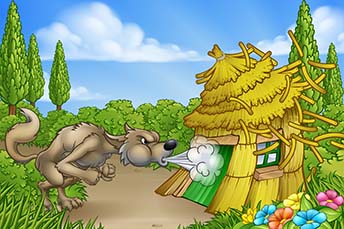 How the Housing Market Slowdown Could Impact CFIs

lending
CRE
existing home sales
new home sales
Summary: Following yet another interest rate hike, economists are predicting that the housing market will not only continue to slow, but will hit a major downturn in 2023. We discuss how CFIs can pivot and demonstrate their value to potential borrowers, when it occurs.
Share this Article:
The best-known version of the story of "The Three Little Pigs" was published in a book called “English Fairy Tales” in 1890, but variations of the fable can actually be traced as far back as 1853. The rendition most people know is about three small pigs who each build homes for themselves using different materials — straw, sticks, and bricks. The straw and stick homes are quickly blown down by a big bad wolf who wants to eat the pigs, but they ultimately survive when the trio take shelter in the brick house that can’t be blown down.As inflation and interest rates continue to rise, many may wonder if the current housing market is heading toward a fate similar to that of the first little pig’s straw house. It appears that this worry is well founded. Economists are predicting that the housing market is not only likely to slow, but it may actually experience a major downturn in 2023.Looming Slowdown

It is well known on Wall Street that what goes up eventually comes down, and vice versa. Naturally, economists have been watching the housing bubble closely. They believe that while it may not be ready to pop just yet, it is certainly beginning to deflate and will continue to do so for the foreseeable future. According to “The Housing Downturn: Further to Fall,” a recent report from Goldman Sachs, before year end, analysts expect a 22% drop in new home sales, a 17% decline in existing home sales, and an 8.9% decline in housing GDP as a whole, with the latter expected to decrease an additional 9.25% in 2023. Goldman’s analysts aren’t alone. Morgan Stanley is predicting the second-largest peak-to-trough decline in home prices since the Great Depression and expects that as higher interest rates cause demand to fall off, US home prices will drop by 7% by the end of 2023. Fitch Ratings, in the meantime, expects that house prices could fall by more than 10% over the coming year.The Impact

Though analysts are primarily in agreement that housing prices will begin falling, prices are still significantly higher than they were pre-pandemic. The combination of lingering high prices and higher interest rates has caused many would-be buyers to slam on the brakes, with builders seeing the highest number of canceled deals for new homes since the pandemic began. That reality, combined with the fact that the cost of building supplies continues to soar, has led many builders to table construction. The fallout is already being felt on the lending front by some of the financial industry’s largest players.JPMorgan Chase reported a 45.5% decline in QoQ mortgage originations in its third quarter earnings, while Wells Fargo reported a 36.1% decline for the same period. Reduced mortgage lending is only expected to get worse, with JPMorgan’s CEO Jamie Dimon predicting that inflation will lead to the depletion of many people’s savings as soon as the middle of 2023. “It’s rather predictable if you look at how they’re spending… You have inflation, higher rates, higher mortgage rates, oil volatility and war. So those things are out there, and that is not a crack in current numbers. It’s quite predictable. It will strain future numbers,” said Dimon.Looking Forward

As community financial institutions (CFIs) prepare for the year ahead, bracing for lower lending activity should be a given. Now is also the time to take a closer look at lending portfolios for signs of any emerging cracks as inflation begins to take a toll on the amount of money people have for their day-to-day living costs, and savings accounts start to deplete. CFIs can demonstrate their value and solidify relationships with customers who may be struggling to stay on top of loans by offering advisory services. But there may still be pockets of opportunity that remain on the housing front.With sentiment among builders decreasing, one area where CFIs could potentially see an uptick is in the refinancing of projects that were originally intended for sale and may instead be converted to rentals. Since many people are still unable to purchase new homes in the foreseeable future, the rental market is not likely to lose steam anytime soon. Landlords will be able to command higher rent in many markets and may be interested in implementing upgrades in order to charge premium rates. Despite the slowing housing market, there are still plenty of people who have been sitting on the sideline over the past two years who could begin actively looking to buy once prices start trending down — particularly younger generations such as millennials, who are eager to buy their own homes when the time is right.Keeping abreast of the changing housing landscape is critical for CFIs. Knowing where the most likely real estate lending opportunities remain moving forward and actively engaging with these potential borrowers could help soften the impact when the housing bubble finally does burst.
Subscribe to the BID Daily Newsletter to have it delivered by email daily.

Pros and Cons of Basing Early-Stage SBA Loans on Gross Income
Borrowing a page from the Paycheck Protection Program, some banks have begun offering microloans to early-stage businesses based on their gross income. We consider the pluses and minuses of this underwriting method.

The Importance of Fairness Testing on Artificial Intelligence
As financial institutions increasingly rely on artificial intelligence and machine learning to determine lending worthiness, fairness testing software is becoming an important component in verifying that the algorithms lenders are relying on don’t have their own biases built in.