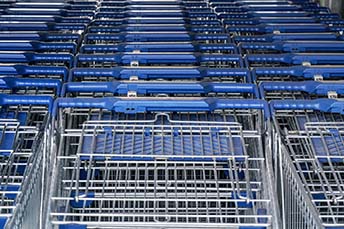 by Steve Brown
lending
risk tolerance
Summary: The bid by Ford to gain approval from the FDIC for an industrial bank is the latest attempt by a major company to gain a state banking charter. Smaller banks are wary, while other large corporations like Amazon, Walmart, and Home Depot are no doubt watching closely.
Share this Article:
A one-stop-shop is defined as a place where customers can find a wide variety of products and services that they need, all under one roof. Big box retailers, such as Target and Costco and Walmart, fit that bill. Customers benefit from the convenience of fulfilling all their shopping needs in one place, rather than going to different businesses, while the retailers see increased profit and market share.We’re beginning to see similar endeavors in the automobile industry — only with an eye towards a merger with the finance industry to provide a one-stop-shop convenience for their customers. While a state chartered bank can’t be a car company, it might be possible for a car company to also become a state chartered bank. Ford Motor Company believes it can be both, and regulators must now decide if they agree. Ford has an application pending before the FDIC to create Ford Credit Bank, an industrial bank.Ford’s bid is the latest twist in a long-running debate over whether specialized industrial banks should be treated like general banks and allowed access to FDIC insurance. Other companies, such as tech giants Amazon and Google, and retailers such as Walmart and Home Depot, have shown interest in industrial banking. No doubt, they are keeping a close eye on how the Ford case plays out.The Issue with FDIC Insurance

Community financial institutions (CFIs), which are already facing new competition from non-bank lenders, are also keenly interested in the Ford case. If industrial loan companies (ILCs) take off, CFIs could find themselves facing new competing banks that are owned by real estate companies, industrial developers, or tech companies that also enjoy FDIC coverage. If industrial banks wind up being riskier than general-purpose banks, it could drive up FDIC insurance costs for everyone. The Independent Community Bankers of America has already weighed in against the move, stating that a bank set up to make car loans to Ford customers may be risky for consumers, and “the purpose of FDIC insurance is to protect depositors, not to subsidize the lending operations of large commercial-industrial firms.”The FDIC took a long look at the industrial bank designation recently and issued an extensive report on the topic in 2021, along with an updated rule governing the niche. The revised rule calls for a clear understanding and special agreement between the government and any industrial bank applicant. The Ford case should provide guidance on how the FDIC will approach applications under the new rule.It should be noted that companies already have the ability to create commercial lending arms that can provide loans to their customers. In fact, Ford already operates Ford Motor Credit, which does just that. An ILC with a state charter provides the added benefit of FDIC insurance, which companies like Ford clearly crave.The Rise of Industrial Banking

The legacy of industrial banks dates back more than a century, when they were created as ILCs by companies to provide small loans to their workers. Their usefulness declined over time until 1982, when legislation extended FDIC insurance to them with less-restrictive oversight than general purpose banks. ILCs began a modest comeback, then took off in Utah after the state enacted ILC-friendly laws. As of 2019, Utah, with $140B in ILC deposits, held more than 90% of all ILC deposits in the country. Utah is probably watching the Ford case as well, to see what impact it might have on the unique situation in that state.For CFIs, the Ford case and the future of industrial banks represents yet another potential challenge to the business model, revolving around providing banking services to distinct geographic areas, with an emphasis on lending to local businesses. If Ford-style industrial banks catch on, CFIs could find themselves competing for small business loans against new ILC lenders with the same FDIC insurance, but less robust regulation.Much will depend on how the Ford application plays out, and whether Ford will remain just a car company or whether they will also become a bona fide bank. We will watch this development closely as other tech giants and retailers are, so we all can be prepared for what may come.Update: an earlier version of this BID inaccurately stated that Ford is seeking a federal charter. This article has been updated to clarify that Ford's application is for a state charter.
Subscribe to the BID Daily Newsletter to have it delivered by email daily.

Pros and Cons of Basing Early-Stage SBA Loans on Gross Income
Borrowing a page from the Paycheck Protection Program, some banks have begun offering SBA loans to early-stage businesses based on their gross income. We consider the pluses and minuses of this underwriting method.

The Importance of Fairness Testing on Artificial Intelligence
As financial institutions increasingly rely on artificial intelligence and machine learning to determine lending worthiness, fairness testing software is becoming an important component in verifying that the algorithms lenders are relying on don’t have their own biases built in.

With our Insured Deposits Solution, PCBB can help you attract and retain larger depositors, enabling you to increase your non-brokered deposits. Contact PCBB to find out how.