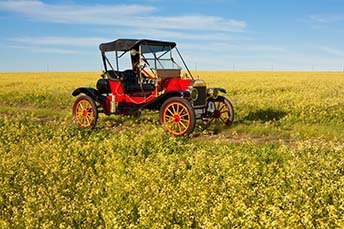 Keeping Up with the Mobile Banking Crowd

mobile banking
Summary: Mobile banking use increased dramatically during the pandemic and its growth is projected to continue for years to come. CFIs need to respond to the evolving mobile needs and wants of customers and small businesses. We cover current trends in mobile banking that customers are looking for.
Share this Article:
When the Ford Model T was introduced in 1908, it was a newfangled phenomenon that transformed the transportation industry into a more self-serve approach, so ordinary people could rely less on public transit. But the Model T, while impressive for the time, doesn’t have anywhere near the capabilities and luxuries of today’s cars. Mobile banking, another service that’s poised to make customers more self-reliant, is already undergoing the same transformation as cars did.While mobile banking continues to advance, branch closures have been accelerating. For CFIs, the shifting sands of bank service delivery options present an ever-evolving set of challenges. Maintaining a strong correlation between services delivery options and customer demands requires keeping a close eye on customer desires.Growth of mobile banking. One recent survey by S&P Global Market Intelligence offers some insights. The survey, conducted from February to March in 2021, found that 52% of consumers were visiting branches less often since the pandemic began, while 65% were spending more time on mobile banking apps. Almost nine of ten who indicated that they were using mobile banking apps more often said they also planned to continue or even increase their mobile banking usage long after the pandemic was over. Various projections show mobile banking continuing to grow for at least the next few years. BAI research indicates that mobile banking is poised to grab an increasing share of channel usage, growing to 22% over the next 3Ys.Mobile versus branch banking. A lot of that growth comes from the younger cohorts, but mobile banking has been making inroads even with the senior crowd (although older bank users remain the biggest fans of branches). While banks have been closing branches, there’s evidence that consumers still use and want access to branch banking. EPAM’s 2022 Banking Report — which surveyed 26K banking customers across eight countries, including the US — revealed that 85% of respondents visited a physical branch of their bank within the past year.In shaping a channel strategy, it is helpful to know how customers use branches versus digital options. As for branches, the most common uses cited in the S&P survey related to cash and checks. About 54% of respondents said they either withdrew cash or made deposits into their accounts. One in four cashed a check, and half used the ATM.Popular mobile banking uses. Much of the mobile banking growth came from first-time users, who discovered during the pandemic, just what mobile can do. S&P noted that roughly one in four users tried mobile check deposit for the first time during the pandemic. One in five were first-time users of such operations as account-to-account transfers, bill payment, or peer-to-peer payments.
CFIs will need to go beyond those functions to keep up with customer demands. According to one survey, newer mobile banking options that are becoming more popular are:
Small business owners are rapidly adopting mobile banking. Of particular note for CFIs is how small business owners are rapidly adopting mobile as a tool. According to one recent report, 66% of small business owners now use mobile in some way to conduct business. But they also use mobile in loan applications and payments. According to one survey, small business owners who used mobile banking during the previous three months rose from 53% in 2018 to 69% in 2021.While that increase in mobile usage should motivate CFIs to do more to meet the demand, it doesn’t mean scaling back on more traditional methods. That same survey indicated that in 2021, almost as many small businesses had visited a branch in the previous three months as used mobile banking. About 39% said that an annual review with their bankers would be beneficial, while only 8% said that their bankers communicated with them too often.For CFIs, keeping up with the mobile banking demands of businesses and consumers will likely be a fundamental task for years to come. But CFIs should keep in mind that small businesses as well as consumers still want personal service and access to branches. They want the convenience and efficiency of mobile, but also the reassurance of a real person to talk to.
Subscribe to the BID Daily Newsletter to have it delivered by email daily.