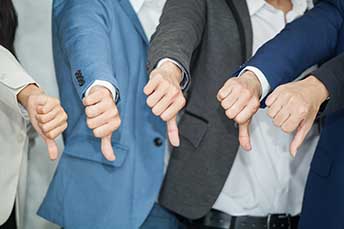 small business
lending
industry update
Summary: Small business owners are more pessimistic about the economy than they have been in nearly half a century, according to a new survey. But they remain somewhat optimistic about their own future. In this muddied outlook, CFIs need to move cautiously in how they work with small business borrowers.
Share this Article:
If you’ve encountered someone with a habit for magnifying the worst-case scenario, you might have called them a “Debbie Downer.” This moniker found its way into pop culture via a fictional pessimist played by comedian Rachel Dratch on “Saturday Night Live.” When it comes to the small business sector, though, it seems this caricature’s spirit has become more reality than satire.Small business owners have become especially pessimistic lately. They are more worried about the future than they have been in nearly half a century, according to the National Federation of Independent Businesses (NFIB). In June, the NFIB Small Business Optimism Index dropped to the lowest level since the survey began 48 years ago.Small business owners are unusually wary this year. Pessimism among small businesses has been growing steadily since January and poses a potential problem for community financial institutions (CFIs). Small business lending is the profitable sweet spot for CFIs. If small businesses are worried about their future, perhaps CFIs should be as well.So, what are small business owners worried about? Topping their lists were inflation and supply chain problems. Half reported job openings they were unable to fill because of the tight labor market. Despite only 27% saying that all their credit needs were being met, 61% had no interest in obtaining new loans.One overarching concern is a recession. In a June survey by Goldman Sachs, 93% of small business owners said they feared there would be a recession within the next 12 months. If a small business owner believes he or she is staring into the jaws of a recession, it’s not very likely that they’ll be interested in expanding or taking out new loans.Recession concerns by small businesses are certainly understandable. Recessions are bad news across the economic spectrum, but small businesses are especially vulnerable. A recent deep dive by the Federal Reserve Bank of New York into the 2007–2009 recession found that small businesses were hit much harder than their larger counterparts. For example, businesses with fewer than 50 employees experienced job losses of 10.4%, while those with more than 50 employees shed only 7.5% of their workforces.Close monitoring of possible business loan delinquencies is essential. Knowing that small business owners are concerned about a broad business downturn in the coming year, a CFI would do well to identify possible weak borrowers and start reaching out to them with a goal of helping them manage their finances and stay current on their loans. But there is also a need to try to accurately predict potential delinquencies and to set aside adequate reserves.The other issue is that CFIs need to make their own assessments of economic strength in the coming months. Already, there are conflicting predictions about whether the economy will fall into recession, or if the inflationary cycle has peaked. A more optimistic economic outlook would suggest CFIs might want to talk small business owners out of their funk, perhaps even encourage some of them to start borrowing again.Despite the statistics, most small businesses remain optimistic. The argument for optimism isn’t that contrary. In fact, the Goldman Sachs survey found that, despite all their worries, 65% of small business owners said they were optimistic about the outlook for their own businesses in the near future.The seemingly at-odds opinions of small business owners is probably just a reflection of human nature. We may know bad things can happen, but we don’t think they are going to happen to us.For CFIs, this makes for a difficult period in which to try to understand what’s on the minds of their small business borrowers, and how to respond. A cautious approach is probably wise, with an emphasis on lending to clear-eyed small business borrowers, who not only have a strong business model but also a thorough grasp of risk in a changing economic landscape.
Subscribe to the BID Daily Newsletter to have it delivered by email daily.