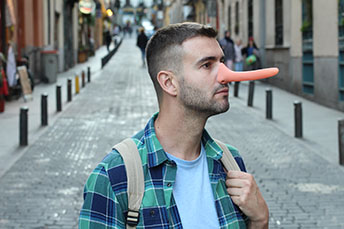 cyber risk
fraud protection
Summary: Did you know that 15MM Americans experience identity theft annually? In an effort to help stem this tide, several organizations are using selfie authentication, which uses biometrics to validate a person’s identity along with other information. We outline the growth of this practice, along with consumer pushback, data privacy laws, and more.
Share this Article:
Since it was published in 1897, the story of Cyrano de Bergerac has withstood the test of time. Edmond Rostand’s tale is of a talented, well-spoken man who assumes he will not appeal to the woman he loves because of his awkward appearance. So, instead, he helps a friend woo her by feeding him what to say. It has been performed countless times and seems to be resonating with many today. The most recent portrayal, “Cyrano” received several positive reviews and award nominations, including Best Motion Picture – Musical or Comedy, at the Golden Globes.  Unfortunately, community financial institutions (CFIs) know a little something about people representing themselves as someone other than who they really are. With identity theft rampant in recent years, and further exacerbated by the pandemic, identity verification has become more crucial than ever. To strengthen efforts in verifying people’s identities for online transactions, many organizations are employing artificial intelligence (AI)-backed selfie authentication programs. These programs use a government-issued document that a company has on file, such as a driver’s license, and match it with a person’s real-time selfie using facial biometrics for identity authentication. Identity theft - a big problem

Identity theft is one of the top problems plaguing financial institutions. Fifteen million Americans experience identity theft annually and overall, 33% of people in the US have been victims of ID theft. The onset of the coronavirus made this situation even worse. As unemployment claims rose, so did ID fraud. Criminals were quick to both impersonate people who made legitimate claims and outright falsify claims. These illegal efforts have reportedly cost the government as much as $400B over the course of the pandemic. Selfie ID verification gaining ground

Digital commerce and banking are not only expected to be permanent, but also to continue growing. This reality has spurred many organizations to turn to AI-backed selfie authentication as a means of ensuring that the person they are interacting with online is actually who they claim to be. Four of the largest players in the banking industry are actively utilizing this type of security process — USAA, HSBC, TD Bank, and BMO Financial Group. In fact, according to research firm Aite-Novarica Group, between 15% and 20% of US financial institutions have already begun using some sort of combination of selfie photos and document verification to verify the identity for mobile and online account openings. Governments have also taken an interest in this ID technology solution. The UK, New Zealand, and Denmark use this type of technology to access certain government services. In the US, over 20 federal agencies, including the Social Security Administration, have been using a digital ID system based on LexisNexis services. But, they are still testing facial recognition features for “fairness and accessibility.”The IRS even recently announced that it too was going to start authenticating the identity of anyone seeking to file their taxes, make payments, or check their tax records by facial recognition, using a real-time selfie, coupled with scans of that person’s government documents, such as a state driver’s license. However, due to raised consumer concerns, the organization has softened these requirements for the time being, while it reassesses how best to move forward.Some consumer pushback

While there is a need for more robust ID verification in the digital age, some consumers have privacy concerns and fears of what could happen if selfie ID platform databases were hacked. There are also advocacy groups that are worried about the equity of the current system. For instance, the unbanked are less likely to have government-issued IDs or have the capabilities to send the necessary photo. National standards and privacy laws

Still, biometric ID verification is here to stay. The National Institution of Standards and Technology (NIST)’s 2017 standard supports its use to fight fraud. As part of these standards, the Enrollment and Identity Proofing Requirements notes “Enrollment and Identity Proofing recommends that biometrics be collected in the enrollment process to later help prevent a registered subscriber from repudiating the enrollment, and to help identify those who commit enrollment fraud.” As organizations proceed with these plans, it is critical to ensure consumer protections and data privacy. Biometric privacy regulations are incredibly important, yet, they differ by state, which can make it more challenging, especially with branches across state lines. Regardless, it is essential to stay on top of the latest data privacy rules as you gather and store customer biometric data. For additional information, read our BID article, “Is Your Institution Keeping Up With Customer Data Privacy Rules?”If you are looking to add selfie ID verification to your toolbox, here are three steps for selfie verification.
Progress is being made on the selfie ID verification technology front, but concerns still need to be allayed. Whether you are jumping in or staying on the sidelines, make sure that you mitigate all the appropriate risks and communicate that with your customers.
Subscribe to the BID Daily Newsletter to have it delivered by email daily.