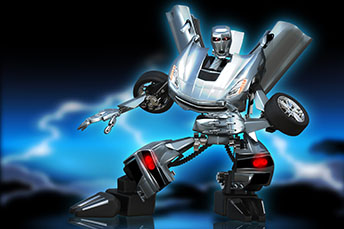 cyber risk
fraud
Summary: The use of QR codes has skyrocketed since the pandemic. This year, one billion smartphones are expected to access QR codes globally, according to Juniper Research. This increased use has gotten the attention of cybercriminals. Here are four ways you and your customers can protect yourselves.
Share this Article:
Transformers, a species of robotic beings that can change from robots to high-speed vehicles, weapons, or electronic items, were first introduced to the public in 1984 as a Japanese toy line. But they took on a life of their own in 1985 when Hasbro bought the line and partnered with Marvel Comics to create a storyline around the individual toys. The characters became so popular that they spawned a film line, with the first Transformer film coming out in 2007. This film franchise has netted more than $4.9B in global box office sales, as of 2021. The idea of things being other than what they appear may be fun in comic books and movies, but not necessarily in the real world. This is something that consumers and financial institutions are discovering first-hand with scammers. Scammers have become increasingly creative and deceptive. They have transformed their tactics to include things people are unlikely to question, such as QR codes. For community financial institutions (CFIs) working to stay on top of banking risks, it is important to stay abreast of this latest type of fraud.The pandemic triggers QR code growth

With the onset of the pandemic, the use of QR codes surged. As we know, restaurants were at the forefront of QR code adoption with contactless digital menus. In 2020, 52% of US restaurants had switched to QR code menus and likely many more have done so by now. QR code adoption has continued to grow as people become more familiar with its use and costs can be lowered for businesses that use them. This year, one billion smartphones are expected to access QR codes globally, according to Juniper Research. Financial institutions’ use of QR codes

As financial institutions (FIs) need to keep pace with fintechs, many have found QR codes helpful. They streamline the customer experience and can be a secure payment option. With a QR code, customers can be directed to the exact website location for their needs, whether that is for loan documents or opening a new account. Some FIs are using QR codes in place of biometrics and passwords to access their accounts or withdraw funds at an ATM too. This can be a secure and seamless way to access their accounts, but only if the QR codes have end-to-end encryption built in. Venmo, Apple Pay, and PayPal use QR codes and are linked to many FI accounts for payment.Fake QR codes

The growth of QR codes has not been lost on criminals. They are creating fraudulent QR codes, as a way of redirecting consumers to phony websites to hijack payments, steal passwords, and personal data. They can also be used to reveal a person’s location and gain entry into financial accounts.For instance, in January 2022, authorities in Texas discovered phony QR codes on parking meters in both Austin and Houston. Unsuspecting people were scanning the QR code to make a parking payment and some of them may have been scammed.   While the practice is only just picking up speed, it has been effective enough to make it onto the Federal Bureau of Investigation’s radar. The agency issued a public service announcement, warning people to be vigilant in their use of QR codes. How to protect your customers from QR code fraud

While we have not heard of any FIs experiencing security issues in their use of QR codes yet, diligence is needed. Educating your customers on the potential risks with QR codes and the latest QR scams will help keep them protected.
As with all technology offerings, QR codes provide benefits and risks. If your institution and your customers stay informed of the risks, you can all enjoy the benefits.
Subscribe to the BID Daily Newsletter to have it delivered by email daily.