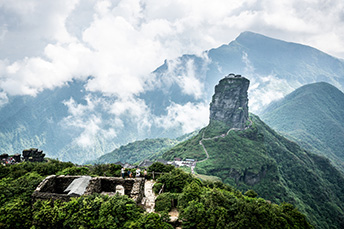 Is Your Institution Ready To Transition From LIBOR?

lending
hedging
SOFR
Summary: We have been talking about the transition away from LIBOR for a few years now and the end date is upon us. No new LIBOR exposures are allowed after December 31, 2021. Many community financial institutions are making progress, but only 24% had set a replacement rate, as of this summer. Is your institution prepared for LIBOR’s end date? Here are a few recently released regulatory expectations, to keep you moving for a successful transition.
Share this Article:
In China’s Guizhou province at 7,664 ft atop the Fanjingshan Mountain sits the Temple of Buddha and Maitreya Temple. While the exact date of construction is not known, temples were built in the area starting in the 7th century AD. To reach these sites of enlightenment, you need to walk 8,888 steps from the base of the mountain. Quite a journey to reach the top!The transition from LIBOR has also been quite a journey. Are you ready for the cessation of the London Interbank Offered Rate (LIBOR)? While bankers know that this is coming, some institutions may not be quite where they need to be. If your community financial institution (CFI) uses LIBOR to price loans or for other activities, you need to be ready to switch to an alternative rate by the year’s end. Make no mistake that regulators are serious. This is a hard deadline. “Let’s face it, there are still people out there who believe that some way, somehow, LIBOR will not be discontinued but will survive as a `synthetic LIBOR,’ or as some have called it, a ‘zombie LIBOR,’” said Michael Hsu, Acting Comptroller of the Currency, in an October webcast. “Let me be clear, the federal financial regulators have said no new LIBOR exposures — zombie or otherwise — after Dec. 31, 2021, and we mean it.”This past summer, a fair number of CFIs had started down the road to transitioning, but not as many had completed all the necessary steps, according to a Crowe survey. Most of the respondents had established a transition plan at least, and a significant majority had identified all affected contracts and added fallback language to new contracts, while only about one-third had modified existing contracts to add fallback language. Forty-five percent had ceased entering into any new LIBOR-based contracts. However, only 24% had set a replacement rate and roughly one in five had determined any needed change to credit spreads. Moreover, just 12% had assessed tax accounting and financial reporting implications of transition. In October 2021, regulators issued a joint statement reiterating their LIBOR transition expectations and included some clarifications. Here they are.
To aid institutions in their transitioning, there are several resources available. The OCC has posted a self-assessment tool and the Alternative Reference Rates Committee has posted a user guide and other resources, including recommended fallback language for a variety of contract types. While CFIs seem to be on the right path to transition away from LIBOR, it is important to ensure that your institution is fully transitioned before the end of the year. Make no mistake that this is regulators’ expectation.
Subscribe to the BID Daily Newsletter to have it delivered by email daily.

Beginning January 1, 2022, per Fed guidance, PCBB will no longer enter into LIBOR-based transactions. Visit our SOFR Resource Center for the timeline with specific dates.