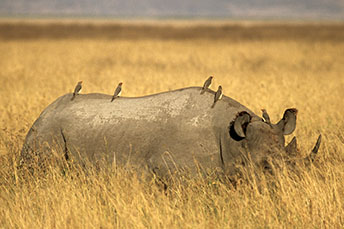 Ag lending
agriculture
Summary: There are mixed signals for ag lenders these days. The Rural Mainstreet Index overall dropped to 70 in June, yet the index has shown seven months in a row of figures above “growth neutral.” We provide you with more pertinent data to give you a clearer picture of the current situation for ag lenders and how prepared they are for the future.
Share this Article:
Have you heard of Oxpecker birds? They are found standing on the backs of rhinos to eat the bugs from the rhino’s skin. Not only that, but they also provide a warning to the rhino when they notice a predator lies ahead. Wouldn’t it be nice to have someone tell you what lies ahead?  Many ag lenders are specifically wondering what lies ahead, as they are getting mixed signals lately. While we don’t have a crystal ball, we provide you with the latest data, giving you a clearer picture.The overall pictureThe Creighton University Rural Mainstreet Index (RMI) overall dropped to 70 in June from a record 78.8 in May. But, the index has still shown seven months in a row above “growth neutral.” Growth neutral is considered 50 on the index of 0 to 100. Almost half of bank CEOs surveyed for the RMI —46.7%— reported growth in their local economies between May and June. As evidence of that, the farmland price index (a separate part of the RMI) reported nine straight months above growth neutral, landing on 75.9 in June. This type of positive streak has not happened since 2013. Furthermore, agricultural equipment sales are increasing at a rate not seen in the past nine years. Nonetheless, there are some concerns on the horizon for ag lending, including how dry conditions will affect markets and crops, a possible downturn in farm income, and the increase of government regulation.It’s worth noting that in Q1 of this year, agricultural lending activity at commercial banks waned at a “measured pace.” That’s according to the National Survey of Terms of Lending to Farmers, as cited in a Kansas City Fed report. Nonetheless, the report predicts a “significantly improved” outlook for 2021, with the caveat that increasing input costs could put pressure on profit margins.A deeper dive into ag bankingLast year, 1,642 banks specialized in agriculture lending and experienced strong asset quality and capital levels. Furthermore, asset quality actually improved, despite the pandemic, according to a report from the American Bankers Association. A notable 97.1% of these banks were profitable last year; more than half (51.3%) said they boosted earnings. What’s more, farm banks increased their number of employees to 81,000, with employment rising 2.4% from 2020. Through the lending lensFarm banks provide a vital source of lending to farmers. They held almost half of all loans to ag borrowers in the amount of $174B at the end of 2020. They also largely participated in PPP. Farm banks held 172,818 PPP loans on their balance sheets at the end of last year. These loans, totaling $12.7B, were provided across various rural communities through more than 7,700 branches.

Overall loan growth was strong at farm banks last year as well. Total loans at farm banks rose 7.0% to $293.8B. That’s compared with 3.3% for the industry as a whole, according to the ABA.Deposit growthConsistent with the overall banking industry, farm banks witnessed unprecedented deposit growth in 2020. Farm banks maintained $402.5B in deposits in 2020, which is an increase of 18.4%, or $62.5B, from 2019. As a result, the loan-to-deposit ratio for farm banks dropped meaningfully, along with the rest of the industry. The ratio went from 80.8% at the end of 2019 to 73.0% at year’s end 2020. Certainly, there are several unknowns ahead, but the data shows the resilience of farm banks. These institutions are vital to both their rural communities and the national economy. So, it is reassuring to see these positive signs; these rural banks seem well-positioned to continue satisfying the needs of their customers.
Subscribe to the BID Daily Newsletter to have it delivered by email daily.

Hobbyists Are Pricing Out Some Farmers and Ranchers
The boom of hobby farmers is driving up rural real estate prices and driving traditional farms out of the market. With aesthetically attractive farms being the most in demand, here are the best ways to advise traditional farmers and ranchers so they can find viable, affordable land.

How Will Continuing Geopolitical Events Affect Ag Customers?
Many farmers have been reaping the benefits of rising commodity prices, some higher than 140% over the past 18 months. Yet, the Russian invasion of Ukraine changed the direction of the wind for many farmers. How will your agricultural customers fare through the geopolitical turmoil?