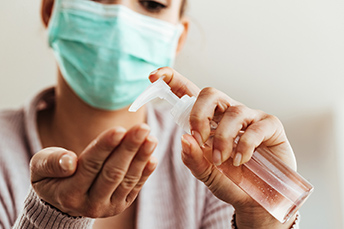 50% Of People Would Switch Banks For Biometric Cards

biometrics
payments
Summary: Since 63% of consumers expect to increase their usage of contactless payment cards, community financial institutions will want to stay abreast of the latest contactless payment trend, biometric cards. We provide highlights that include added security card features, how demand is rising, and fingerprint-enabled cards already in circulation .
Share this Article:
According to a survey by OnePoll, 64% of those surveyed said they are germophobic now, due to the pandemic. Respondents reported washing their hands 10x per day, in addition to using hand sanitizer 8x per day. Though vaccines are now being actively distributed and administered, the public’s concerns about touching public surfaces remain high. This has not only led to a significant boost in electronic and mobile payments over the past year, but also driven demand for contactless payment options such as biometric bank cards. Further, with public demand for contactless payment options expected to increase, community financial institutions (CFIs) cannot afford to ignore advances on this front, particularly fingerprint-enabled bank cards. We give you some highlights to keep you posted on this payment trend.Added security. While fingerprint-enabled bank cards appear the same physically as any other credit or payment cards, they are embedded with biometrics sensors that can verify the card owner’s identity without the need for touching any sort of external scanner or PIN pad. Fingerprint recognition serves as an alternative to signature or PIN authentication for transactions, only allowing charges to go through if the card holder’s fingerprint is a match to the print that is registered with their card issuer. An individual’s fingerprint is stored securely within the card itself and once a finger is placed on the sensor a small light will glow red or green to indicate whether the print is a match. This added security measure also gives card issuers a bit more freedom to extend larger amounts of credit to cardholders, without needing to increase maximum payment amounts as is often the case without such measures.  Rising demand. As we discussed in earlier articles, the demand for contactless payment cards has been increasing. According to the findings of a recent survey from biometric company, Fingerprint Cards, more than 50% of people living in developed countries would be willing to switch banks if doing so would provide them access to biometric payment cards. These cards seem to appeal to younger consumers, ages 18 to 35 Ys old (66% interest) and those with higher incomes (61%). The additional charges for added security and convenience do not appear to be a deterrent, as 43% of people indicate that they would be willing to pay more for fingerprint-enabled bank cards. Already in circulation. BNP Paribas recently became the first major bank to rollout fingerprint-enabled bank cards to its customers. The bank launched a limited release of a biometric Visa card in France, with expectations that the card will be available throughout the entire country by the end of 2021. The new card is available to French consumers for an additional $29 equivalent.Industry experts predict that similar launches will take place among card issuers in countries around the world this year, so keep your eyes open. As with many new technologies these days, it could hit our shores sooner rather than later.
Subscribe to the BID Daily Newsletter to have it delivered by email daily.