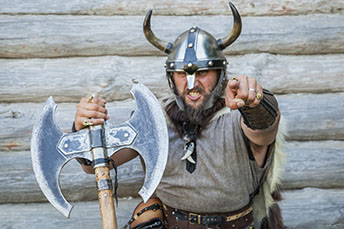 What Have Your Peers Been Doing In This Crisis?

by Steve Brown Topics: customer experience, employees, coronavirus, COVID-19
Summary: Financial institutions have had to adapt their business practices during the pandemic. See how your institution compares to your peers in the latest survey by Bank Director.

There is evidence that Viking men wore makeup. While we're not exactly sure why, it may have helped them with their warring duties in some way, shape, or form.
Many banks have been working hard on their duties too -- counseling customers, doling out PPP loans, and working hard to ensure employees' safety. Amid these efforts, it's easy for a bank to feel like an island unto itself. In reality, we're all in this situation together. Bank Director's 2020 Compensation Survey helps to illustrate that; so, today we wanted to share some of the numbers so you could benchmark your practices to your peers.
Flexible work. The survey was disseminated in March and April, right around the time the coronavirus crisis in the US was intensifying. A whopping 92% of respondents said their bank instituted or expanded remote work opportunities. Meanwhile, 80% of respondents said they introduced or expanded flexible scheduling amid the pandemic.
Exemplifying how banks shifted gears, the study shows that more than half expanded paid leave as encouragement for employees who might be symptomatic to remain at home. Seventy-one percent of bank respondents said they had instituted travel prohibitions to keep employees safe.
Appointment only. Over 78% of banks restricted in-person meetings -- offering them by appointment-only for the safety of customers and staff members. There are some noticeable differences by bank asset size. Those with fewer assets adopted this trend at a higher rate. For example, among banks in the $500MM to $1B asset range, 67% said in-person meetings were switched to appointment-only; whereas that was true of 83% of banks with $250MM to $500MM of assets and 86% of banks with less than $250MM of assets.
Branch closings and hours. A solid 27% said they had closed branches. This trend of closing branches temporarily was more evident in larger banks with higher assets. A full 38% of banks in the $1B to $10B range closed branches compared with only 17% of banks in the $250MM to $500MM asset range and 10% of banks with less than $250MM of assets.
Bank hours changed for some too. One-third of banks altered branch hours. This practice was also more widely adopted by larger banks vs. smaller ones. Forty-one percent of banks in the $1B to $10B asset range said they had amended hours, compared with 30% of banks with $500MM to $1B of assets and only 17% of banks in the $250MM to $500MM asset range.
Obviously, certain areas of the country have been more affected than others, and that too is a major influencer in terms of how banks have responded. We have tremendous pride in what community financial institutions have done so far; we have no doubt they will continue to rise to the occasion to ensure customers' ongoing banking needs are met in a safe, efficient and timely manner, while doing their utmost to safeguard the health and well-being of staff.
Subscribe to the BID Daily Newsletter to have it delivered by email daily.

With about $5T in asset purchases by the five largest central banks, global stocks have gotten within 10% of record highs. With this signal of economic recovery, some central banks have indicated it may not be long before they discontinue the rampant stimulus spending. Yet, with the Fed, Bank of Japan and ECB still staying the course, investors don't seem fazed.

Bank of Canada could be among the first big central banks to raise rates. Investors seem to be expecting a move away from easing with a 50% chance of an increase in interest rates in 2Ys.

To sign up someone at your financial institution to receive this complimentary BID publication, just forward them this link and we will do the rest.
Copyright 2018 PCBB. Information contained herein is based on sources we believe to be reliable, but its accuracy is not guaranteed. Customers should rely on their own outside counsel or accounting firm to address specific circumstances. This document cannot be reproduced or redistributed outside of your institution without the written consent of PCBB.