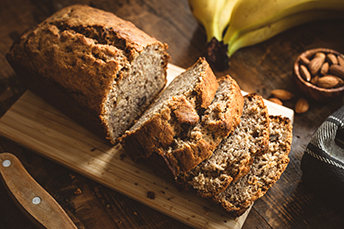 by Steve Brown Topics: economic risk, business customers, coronavirus, COVID-19
Summary: What is the economic outlook for the next three to nine months? Join us as we summarize key elements of job loss and economic recovery and provide tips to translate these conditions into your financial reports.

Are you like many Americans who have eaten a few more baked goods since the stay-at-home restrictions? Doing our own research on this, a one-pound loaf of banana bread is quite easily consumed in a day. While on the topic of consumption, there seems to be a lot of economic news to consume these days too.
The stream of news may be constant, but the total economic impact of the coronavirus crisis is still unknown. It is difficult to balance between social distancing to keep people safe and not waiting too long for the economy to recover. While several economists have been positive about the recovery, the next three months still look dismal. We wanted to summarize what we know so far to help keep you informed and allow you to plan for recovery.
No one argues with the fact that we are in for a brutal quarter. Q2 will likely bring high unemployment - some say 12-15% but JPMorgan has forecasted up to 20% - along with a drastic decline in GDP, up to 40% from a previous forecast of 25%. As of April 9th, there were 6.6mm new unemployment claims. JPMorgan Chase even upped its forecast for April to 25mm jobs lost. But, that number seems to be a moving target.
As of April 16th, 22mm Americans have filed for unemployment. "Claims are now falling, having peaked...two weeks ago," said Ian Shepherdson, an economist at Pantheon Macroeconomics. But, no one denies we are in a period of unexpectedly high unemployment. Compare 22mm to a previous four-week period high of 2.7mm in the fall of 1982. While some of those recently unemployed may be temporarily unemployed, only time will tell if that is the case or not.
Trying to keep the economy moving as we work through this pandemic, more than $6T has been provided to date, between Congress and the Fed. That amounts to greater than 25% of the US GDP, if you look at Q4 2019 goods and services. With continuing economic woes, this number is likely to rise even higher.
As we look forward to recovery, even that scenario has been challenging. Will it be V-shaped, U-shaped or something else?
During the recent earnings call, Citibank CEO Corbat made this comment, "This recovery is going to be uneven. I would say that as a team, we've pretty well discounted a uniform V-shaped recovery. The question is: Is it U-shaped? Is it W-shaped? Are parts of it L-shaped? And I think we want to retain a lot of flexibility and capacity to be able to step into the situations that count."
The economic outlook can feel challenging, to say the least, as it is still unfolding. But, there are ways to tackle the uncertainty, especially as you work on your financial reports. Using robust assumptions and national trends, such as GDP, unemployment and loan loss data, your institution can calculate sound reserve estimates. If you need more information on this, we can provide you with a complimentary report. Just give us a call.
Subscribe to the BID Daily Newsletter to have it delivered by email daily.

In a joint statement, the SBA Administrator, Carranza and US Treasury Secretary Mnuchin shared some impressive statistics. The SBA processed more than 14 years' worth of loans in less than 14 days through the Paycheck Protection Program. "The vast majority of these loans--74% of them--were for under $150,000, demonstrating the accessibility of this program to even the smallest of small businesses." Also, "60% of the loans were approved by banks with $10B of assets or less. No lender accounted for more than 5% of the total dollar amount of the program."

Philadelphia Fed President Harker stated in an interview that he believes many of 22mm jobs lost, such as construction, will come back, but that patience is needed. "...in terms of monetary policy, we're going to stay low until we really see the economy starting to recover back to our dual mandate" of full employment and inflation around 2%, he said.

Many small businesses (40-60%) don't reopen after a disaster, according to the Federal Emergency Management Agency.

COVID-19 uncertainty makes calculating your reserve more challenging. We have a complimentary analysis to share the historical relationship of loss rates, GDP and unemployment which can be used for your reserve consideration. Learn more.
Copyright 2018 PCBB. Information contained herein is based on sources we believe to be reliable, but its accuracy is not guaranteed. Customers should rely on their own outside counsel or accounting firm to address specific circumstances. This document cannot be reproduced or redistributed outside of your institution without the written consent of PCBB.