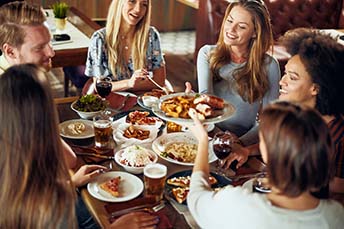 by Steve Brown Topics: CECL, risk management, compliance
Summary: As big banks start finalizing numbers for CECL, other financial institutions can learn from their findings. We report on some of these findings.

People like to eat out. A survey by LendEDU finds that people ages 22 to 37Ys spend about $163/month on eating out vs. only about half that on new clothes ($82).
No matter how you spend your money, suffice it to say that big banks have spent money on and are now rolling out their CECL provisions. We thought you might be interested in the early data.
It seems many large banks are predicting substantial increases to their loan loss reserves under the new methodology, but of course these banks also have a lot more consumer loans too. So, this is expected. After all, the numbers depend on the types of loans in your portfolios. As such, institutions with concentrations in consumer portfolios are reporting significantly higher reserves under CECL.
Student lender Sallie Mae, for example, says it will need to increase the reserves it sets aside to cover potential loan losses on private student loans by as much as 313%. If the company had adopted the CECL standard on June 30, it said in its July 24 quarterly filing, its loan loss allowance would have grown by between $950M and $1.2B--an increase of between 247% and 313% over its current reserve.
Most consumer lenders have said that they will have to increase loss reserves, but Sallie Mae has so far made the biggest estimate. The lender's circumstances help push it to the top of the board. A first-year college student who borrows tuition money doesn't start paying back the loan for at least 4Ys, sometimes longer. The longer the life of the loan, the more opportunities the borrower has to miss payments or default.
CECL also requires you to consider past experience when estimating loss reserves, and people sometimes do default on student loans. Sallie Mae writes off between 1.0% and 1.5% of its portfolio every quarter.
But though Sallie Mae leads the pack in estimating CECL-based loss reserve increases, other financial institutions are also predicting larger reserves, which will translate to lower earnings.
KeyCorp expects CECL will triple loan loss reserves for retail loans. Reserves for commercial loans, however, will stay flat or may even go down.
Associated Banc-Corp expects a credit loss allowance increase between 30% and 40%, which will likely reduce its common equity ratio by around 25bp.
CIT Group says it projects CECL compliance will reduce the bank's capital by as much as $100mm.
JPMorgan Chase (JPM), the country's largest credit card issuer, has said that its companywide loan loss reserves will increase by about $5B, or 35%. In the last quarter of 2018, JPM had card charge-offs of 2.93%.
In each case, starting early on CECL compliance is helping institutions prepare for the change. As the big banks continue to learn the important nuances, you can learn too. We can also help. Contact us today for more CECL information.
Subscribe to the BID Daily Newsletter to have it delivered by email daily.

JD Power research finds 61% of small business customers use their bank's mobile app vs. 53% in 2018.

Community banks should take note of how banks in Europe are being forced to operate and are getting crushed, given the nasty environment of low or negative government bond and deposit yields. The risk exists that this could reach our shores in the next few years, but we certainly hope the Fed will fight the urge to follow suit here. Taking US rates too low or into negative territory would very likely put thousands of community banks out of business. European banks are getting slammed on their margins, so they are: moving to significantly cut costs; sell weaker business lines; and charge customers more for services (not likely to work here given tech and other competition).