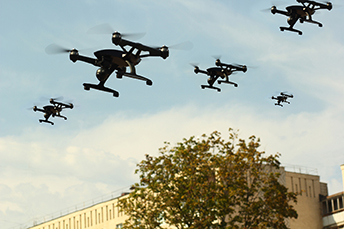 SOFR Transition - Are You Ready?

lending
risk management
business customers
Summary: A top Fed official has a message for banks that have been slow to start switching from using LIBOR as an index - get cracking. We provide the latest update on the LIBOR to SOFR transition.
Share this Article:
Amazon got a patent that would allow it to use delivery drones to record video of a user's property that can be analyzed and used for surveillance. It can look for broken windows, open garage doors and things like that to help catch bad actors.
We haven't yet seen a drone solution by Amazon to deal with the London Inter-bank Offered Rate (LIBOR) to Secured Overnight Financing Rate (SOFR) transition. But, we will be listening for a buzzing sound, just in case.
In the meantime, banks that have been slow to start switching from using LIBOR as an index, a top Fed official has a message - get cracking.
In recent comments to the Alternative Reference Rates Committee (ARRC), Fed vice chair Quarles said the government is moving ahead with plans to phase out the use of LIBOR and to help banks adapt. But he noted that the deadline for making the change is now only 2 1/2 Ys away, so banks need to be working "in earnest" on the transition.
The change is important to community banks, particularly on business loans. These often rely directly on LIBOR as a reference rate when calculating adjustable loan (or setting deposit) interest rates. Community banks caught short making the switch when the deadline hits may not get much sympathy from regulators.
Switching to SOFR though, takes a bit of work. LIBOR is woven into the fabric of bank finances, loan documents, and a host of calculations. The ARRC has offered assistance to banks struggling with the change, including guidance on contract language (we can also help you here so reach out if you want assistance).
As we see it, there are two main approaches to take. The first is to aggressively start the process of transitioning to SOFR. Starting early is not a bad idea, since this could be consuming and difficult work. The other option is to do as little as possible and simply continue to use LIBOR. This puts off any transition work, while waiting to see how things shake out with SOFR.
The latter is obviously the easy path to take today, but it carries risks and could prove to be a costly mistake. There are numerous unintended consequences looming here.
For example, floating rate notes tied to LIBOR could become untenable after December 31, 2021, potentially causing those notes to shift to fixed rates. The ARRC came up with "fallback" language that banks could use now when issuing new floating rate loans. These guidelines though are 39 pages long, which highlights the complexity of making the change from LIBOR.
Another thing to consider is how your lending strategy might be affected. Since SOFR is considered less risky than LIBOR, it is typically at least a few basis points below LIBOR. Sales teams will need to be educated on this to adjust future lending practices to handle the shift.
Lastly, you will need to educate your customers on the differences between the two benchmarks. They may be uncertain of the effects of SOFR. Be sure to help them along during the transition.
For more information, check out our article, SOFR Transition - Contracts and Communication.
Subscribe to the BID Daily Newsletter to have it delivered by email daily.