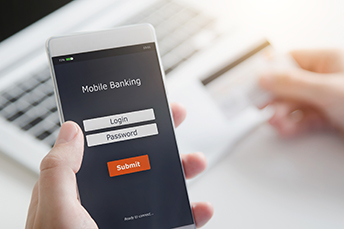 by Steve Brown Topics: cyber risk, payments, risk management
Summary: Mobile wallet technology is becoming increasingly popular. But, just like any technology rapidly on the rise, there are growing risks to consider.

In the past decade there have been some ongoing and significant changes in the banking industry. One of those surfaces by JD Power which finds that while mobile banking customer adoption was low in 2009, it has grown so much that 53% of retail banking customers now say they use mobile banking in 2019. Also over that time, the Fed reports the number of commercial bank and thrift branches has declined nearly 10%, or just over 1% per year. A changing environment these days is expected.
When looking at the industry, other changes are also happening in mobile wallets. The technology is becoming increasingly popular. But, just like any technology rapidly on the rise, there are growing risks to consider.
Mobile wallets allow users the convenience to store information from one or more credit or debit cards (encrypted as 'tokens') on their smartphone. While credit and debit cards of the plastic variety still dominate the scene, the use of mobile wallet technology for payment has been on the rise for roughly 9Ys. Research aggregator Statista forecasts global mobile payments will rocket to more than $1T by the end of this year.
So, it's little surprise that even the most cautious community bank is now at least considering supporting mobile wallet options. If you are one of them, be sure to take into account the potential risks that mobile wallets carry too (if for no other reason than to help educate customers). Potential mobile wallet risks include:
Subscribe to the BID Daily Newsletter to have it delivered by email daily.

While the road is long and winding, challenger bank Chime said it may consider the OCC's special-purpose banking charter. This digital bank works through an app, has 4mm users, and offers a deposit account that supports mobile banking, withdrawals and transfers using ACH, connects to a Visa debit card, and provides FDIC insurance through a partnership with The Bancorp Bank ($4.6B, DE).

Fed research finds the ratio of corporate debt issued to GDP has risen to a record high of 46%. That said, Fed researchers indicate profits have also risen and for the most part should be able to handle the increase.

Community bankers will be glad to hear the number of job openings now exceeds the number of unemployed people by 1.6mm, according to the Labor Department. This is the widest margin in history.