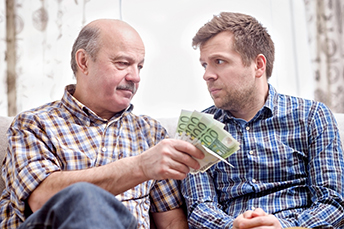 by Steve Brown
deposits
funding
mobile banking
Summary: For many consumers -- millennials in particular -- setting aside large sums of money to meet savings goals can be tricky. One savings app is taking a new approach and community banks should be aware.
Share this Article:
A new survey by Merrill Lynch/Age Wave finds 70% of adults, ages 18 to 34, received financial support from their parents in the last year. In addition, a large 60% said they couldn't afford their lifestyle without such support. It looks like kids may still need their parents, no matter the age, perhaps.
For many consumers -- millennials in particular -- setting aside large sums of money to meet savings goals can be tricky. But, automated tools can take away some of the stress. Small amounts of money transfer seamlessly, so over time, consumers are able to begin building their nest egg in a simple, effective and mindless manner. Based on popularity and convenience, there are now a plethora of options to choose from, when it comes to these automated tools. We have been tracking these automatic savings apps, and today we bring you details of one in particular.
Fifth Third's purchase and subsequent relaunch of the automated savings app, Dobot caught our attention. Here's how the app works: Dobot users set a goal and upload a photo. They determine how much they want to save and when they need the money. Every few days, the app (designed to analyze each user's spending habits) determines how much a customer can reasonably afford to put toward those goals. Then the app automatically transfers small amounts of money from the customer's checking account to a Dobot savings account.
The kicker is that the app is available to anyone who has a checking account with any US financial institution, not just to Fifth Third customers. From the bank's standpoint, it's a win-win. For one thing, it appeals to the tech-savvy money-mindful generation. But, more than that, the app is a clever, soft-sell way to siphon away savings from other banks.
Initial response has reportedly also been positive. In only a few months, the app reportedly yielded roughly 20k users from the bank's customer base alone. Fifth Third has since begun to market Dobot to non-customers, so it'll be interesting to see how this plays out.
While research suggests that customers tend to remain loyal to the bank that hosts their checking account, the Dobot experiment, offers Fifth Third a chance to shake loose this bond sooner or later. Eventually, customers could even be persuaded to move toward a more exclusive banking and investment relationship, perhaps, with Fifth Third.
Already, the bank has its eye on other areas where Dobot could prove useful. Dobot could, for example, take on a consultative role, helping users decide between adding money to savings versus paying down debt. The bank could also attempt to create a nexus between Dobot and its relatively new robo-adviser service. Moreover, there are opportunities for the bank to collect data from Dobot and use it to provide useful advice to consumers.
We're especially intrigued by the potential this has to siphon funds from other banks and how Dobot can help Fifth Third attract and retain new business. Keep an eye out for any siphoning through your customers, while thinking of new ways to fight this creative competition. In the meantime, we'll be sure to keep you apprised of any new developments.
Subscribe to the BID Daily Newsletter to have it delivered by email daily.

Cybersecurity Best Practices For Teleworkers
As the remote work trend intensifies, it brings to the forefront the importance of strong cybersecurity practices. We provide some insight.

Guidelines For CECL Method Selection
Although CECL has been around for some time, there are still questions around method selection. We walk you through it.