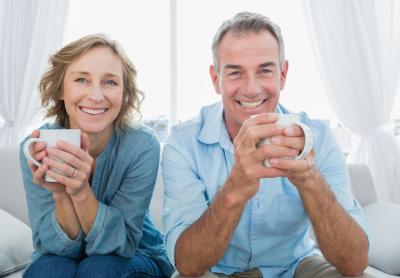 Good news for all of those coffee drinkers out there. New research published in the Annals of Internal Medicine finds a direct correlation between coffee drinking and a reduced risk of heart disease, stroke and liver disease. A 16Y study found men who drank 3 or more cups of coffee per day lower their risk of death by 18%, while women saw an 8% decline. Drink up!
In other good news, 1Q17 was a good time for community banks too, according to the FDIC's Q1 report on how 5,401 community banks are faring. In many categories, community banks outperformed non-community bank counterparts.
Net income for the group rose 10.4% over 1Q16 to $5.6B, with 56% of community banks reporting higher net income than they saw 1Y ago. Pretax return on assets (ROA) increased to 1.33%, up 14bp from 4Q16 and 6bp from 1Q16. Higher loan-loss provisions and noninterest expenses offset higher net interest and noninterest income.
Net interest income rose by $1.2B, or 7.1%, over 1Q16, with 69% of banks seeing higher net interest income. The report attributes the bump to non-1-to-4 family real estate loans, which were up 10% ($761.8mm) over last year. Community banks' average net interest margin (NIM) dipped a bit, going from 3.56% in 1Q16 to 3.54%, probably due to flat asset yields and a 2bp increase in funding costs. Net interest margins at community banks were 41bp higher than at non-community banks and 35bp greater than the overall industry average -- the smallest difference since 2Q13.
Noninterest income went up by 6.8%, or $304.3mm; that's almost twice non-community banks' growth rate. Further, 57% of community banks had higher noninterest income than they did vs. 1Q16, led by better other noninterest income (up 9% or $157.5mm) and servicing fees (up 50.6% or $88.1mm).
Noninterest expenses at community banks increased by $721.9mm, a 5% increase over 1Q16. The report attributes that bump to higher salaries and employee benefits, which were up by $537.3mm, or 6.6%. Community banks had 428,632 full-time employees (or the equivalent) in 1Q17, up 10,841, or 2.6%, over 1Q16. Finally, 1Q17 average assets per employee were $5.2mm, up 5.6% from 1Q16.
Loan balances were up 1.1% ($16.7B) in 1Q17, comprising 69.1% of total assets -- the highest proportion for a first quarter since 2009. More than half (57%) of community banks increased loan balances from Q416, led by nonfarm nonresidential loans (up $10.4B, or 2.4%), multifamily residential loans (up $3.6B, or 3.3%), commercial and industrial loans (up $2.1B, or 1.1%), construction and development loans (up $1.7B, or 1.7%), and 1-to-4 family residential mortgages (up $1.6B, or 0.4%). For non-community banks on the other hand, loan balances declined by $24.7B, or 0.3%.
Loan balances weren't just up for 1Q17. In fact, they rose by $109.9B, or 7.7%, over the past 12 months. Note that this total is more than twice the 3.3% growth at non-community banks.
Slightly more than 75% of community banks increased their loan balances during 1Q17. The report credits this increase to nonfarm nonresidential loans (up $43.9B, or 10.8%), 1-to-4 family residential mortgages (up $16.5B, or 4.3%), multifamily residential loans (up $14.2B, or 14.5%), commercial and industrial loans (up $13.4B, or 7.1%), and construction and development loans (up $11.3B, or 12.4%).
At 0.10%, community banks' net charge-off rate stayed the same as it was a year ago. Community banks saw all major loan categories (except commercial and industrial loans, which were up by 3bp) had a lower net charge-off rate than they did in 1Q16. Construction and development loans had a negative 0.01% net charge-off rate, because recoveries surpassed charge-offs. By contrast, non-community banks' net charge-off rate rose to 0.57%, an increase of 5bp over the first quarter of last year.
All in all, it seems that community banks fared quite well in 1Q17. Of course, the challenges are still there. But, it appears that these challenges are being managed well and positioning community banks nicely for 2Q17, so keep sipping your coffee as you look for an update in another three months.
Subscribe to the BID Daily Newsletter to have it delivered by email daily.

Yields chopped around ending down 1bp, as investors focused on Fed speaker comments of low inflation and its potential impact on further rate hikes.

President Trump will nominate Randal Quarles to become the very first Fed vice chair of supervision. The position was created by Congress in 2010, but never filled prior to this. Also, the Fed board currently has 3 vacancies, so this will fill one, with two more expected soon.

A new CFPB rule will allow bank customers to file class action lawsuits and skip arbitration if they choose.