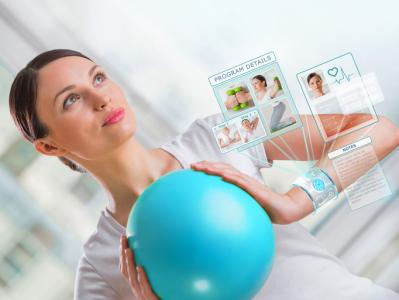 Research by Stanford University Medical Center finds wearable sensors that monitor the heart rate, skin temperature and other variables can actually do a pretty good job in identifying when someone is about to get sick. By monitoring people over time, a baseline of health is established. Once that is collected, biosensors can then check ongoing health factors against the baseline to surface patterns of deviation. Then that information can be leveraged as a good predictor of oncoming sickness when correlated back to specific health problems. If this all works as the testing seems to show, people could be alerted to infections before they are even aware of it and take targeted medications to stop it in its tracks. Pretty interesting don't you think?
Speaking of interesting things, bankers have surely noticed that the housing market has been quite strong for a while now. Some are talking about it reaching its peak while others think the economy points to continued growth.
S&P research finds strong home price increases in the Feb data, along with growth in new home sales. Although existing home sales were down from the previous month, they hit their swiftest stride over 10Ys in Jan and increased YOY in Feb by 5.4%. New single-family homes increased briskly, with 6.1% increased sales from Jan and a robust 12.8% YOY in Feb according to the Census Bureau and HUD.
As home prices have risen dramatically, people who usually would be able to afford a house are now unable to do so. In fact, the US homeownership rate has been decreasing steadily since its high in 2005 of 68.9%. In 2016, it landed at 63.4%. A few key factors are primarily responsible for this decline.
Of course, the crisis caused a sudden drop that many areas felt. Certain geographic areas were especially hard hit, such as Arizona, Nevada and Florida and they are still trying to regain their footing.
Another factor is the impact of larger investors in the housing market. When the crisis hit and prices tanked, institutional investors took advantage of the opportunities. These investors often turned foreclosures into rental properties which took them out of the pipeline for other buyers. Supply was diminishing while demand slowly swelled. This is especially true for high growth areas such as San Jose, Seattle, Austin and Denver. This combination has pushed up the price-to-income ratio more quickly than natural market factors would normally allow and made it more difficult for first-time home buyers to get involved.
Lastly, the changing demographics of the country affect all areas relative to homeownership. This is most pronounced in slower growth regions such as the Midwest, Northeast and South.
Knowing all of this, what does the future hold and how does it affect community bankers? Lower mortgage interest rates have helped this situation some, as more people were able to enter the housing market with a lower cost loan. Now that mortgage rates are rising, other economic factors will certainly come in to play. That mix of things, along with demographic and job changes will ultimately determine the impact to each home buying market.
Given new home development is predicted to grow at a 6.5% pace this year, supply limitations should be easing, which will further balance out housing prices. Median home prices are expected to slow somewhat from 2016 and new home prices and existing home prices appear to be moving closer together.
As housing market dynamics work to facilitate home ownership, community bankers can expect to reap some of the benefits. This environment should hopefully allow you to expand your loan portfolio as well as your customer base. Even millennials that used to seem resistant to the idea of home ownership are starting to have children and get married. All of these are signs they may soon be house-hunting for practical and financial purposes. Bankers should keep experimenting and checking the data to monitor ongoing health, but things right now look ok at least.
Subscribe to the BID Daily Newsletter to have it delivered by email daily.

Fed research on small businesses finds those that most frequently sought financing did so at large banks (50%), small banks (46%) and online lenders (21%).

The Fed currently holds $4.5T in securities and other assets vs. $1.0T prior to the credit crisis. Fed Chair Yellen said the FOMC wants to "have confidence the economy is on a solid course and the federal-funds rate has reached levels where we have some ability to address weakness" before reducing overall holdings.

Deloitte research finds 41% of companies surveyed say they have fully implemented or made significant progress in adopting cognitive and artificial intelligence technologies within their workforce.

Bank of America announced it now has 22.2mm active mobile banking users - a 13% increase from the same period 1Y ago. The bank also said mobile activity now accounts for 20% of deposit transactions, or about the same volume as nearly 1,000 financial centers.

A CreditCard.com survey finds that for purchases over $500, people used a credit card (60%), debit card (24%), paid cash (10%) or wrote a check (8%).
Copyright 2018 PCBB. Information contained herein is based on sources we believe to be reliable, but its accuracy is not guaranteed. Customers should rely on their own outside counsel or accounting firm to address specific circumstances. This document cannot be reproduced or redistributed outside of your institution without the written consent of PCBB.