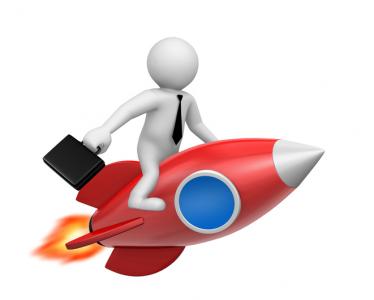 Newly Launched Business Opportunity For You

by Steve Brown
Share this Article:
New things are launching all around us all the time it seems. Point of fact is the latest update for Google Assistant. This voice enabled software now reads your text messages, reads the names of senders, manages conversations and even replies to conversations. Speaking of new launches, consider that in a good news story for community banks, new businesses (particularly small ones) are being launched at a rate not seen since before the last recession.
According to data from the Kauffman Foundation, the US produced 330 new entrepreneurs for every 100k people, as the nation recorded the 2nd year in a row of robust new business formation. This should be great news for community banks, where small business lending is a main source of income.
At its peak in 2009, the economy produced 340 entrepreneurs per 100k before plunging into the recession. The good news is that the Kauffman Index of Startup Activity, a broader measure of new business formation, rose above its 20Y tracking average. This index hit its lowest level ever in 2014, before starting a sharp upward climb. At this point, there are now more than 500k people becoming self-employed each month.
What's more, the Kauffman Foundation pointed out that new entrepreneurs are more often striking out on their own because they want to and not because they have to. This is an important distinction because during the recession, a sizeable chunk of new entrepreneurs consisted of people who lost jobs and had no other option other than to try starting their own businesses. Often these new business owners were halfhearted and lacked the focus and dedication required to run businesses.
That has changed markedly over the last 2Ys as the pendulum has swung decidedly toward those who have job options but choose to launch businesses. This group is in a much healthier situation and these new businesses owners feel that they are called to entrepreneurship rather than pushed into it.
There is still plenty of room for improvement on the small business front, however. Kauffman notes that new businesses are not growing and adding more employees as quickly as they did before the recession. This reflects the slow economic growth of the last few years.
But still, the fact that so many businesses are being formed now should provide a steady source of new loan leads for community banks. The challenge is not just in wisely picking which new businesses to back, but also understanding who these new business owners are and how you can cater to them.
Looking deeper into the data, we find that white males continue to be the dominant force in new business launches, accounting for 60%. However, Kauffman also highlighted three groups showing growth: women, Hispanics and older entrepreneurs. No matter your customer base, be especially cognizant of these groups to determine how best to serve them within your own area.
Also of interest, the number of women who start new businesses has been increasing at a particularly strong clip recently. While men still have a much higher rate of new business formation than women, the male startup rate has been fairly flat. Meanwhile, the female rate has been rising, going from 220 per 100k in 2014 to 260 in 2015.
By age category, those 55 to 64Ys have seen a marked jump in their rate of startup activity over time. This cohort has jumped from about 15% in 1997 to 24% in 2015. At the same time, young entrepreneurship has slipped. Those aged 20 to 34Ys have declined from about 34% in 1997 to 25% in 2015.
What all these numbers point to is a rising new class of business owners, many of them ethnic, with increasing numbers who are women and/or older. Understanding these trends and incorporating them into your lending plans and strategies could help your bank launch forward in the coming years.
Subscribe to the BID Daily Newsletter to have it delivered by email daily.

An Autonomous & Driving Analysis Of CECL

FDIC Vice Chair Hoenig has recommended large banks separate commercial banking activities from other activities by using an intermediate holding company. Under the approach, traditional commercial banking activities would stay at the insured bank, while other activities such as investment banking would be separately capitalized under a new holding company that would be outside the insurance structure and as such, that could be subject to bankruptcy in the event of failure.

Bank of America reported it currently schedules nearly 30,000 financial center appointments each week, up 117% in the past year.

For community banks targeting various customer demographic categories, we note research by Olapic finds 90% of Baby Boomers prefer Facebook to other social networking sites vs. millennials who prefer Instagram (25%). The data points out that younger people will use multiple social sites (so you will have to cover more of them with your marketing efforts), while older people seem to congregate together on a limited number of sites.