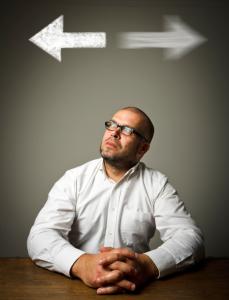 Monopolizing The Customers By Looking Right

First sold in 1935, the classic Monopoly board game lately has been getting trendy. Although Hasbro, which owns the game, recently replaced the iron game piece with a cat, this is the first time they are using crowdsourcing and potentially replacing all pieces. There is a list of 64 suggestions to choose from including the obvious hashtag, emojis, a thumb's up, flip flop, airplane, computer and even a rubber duck. After Jan. 31st, they will tally the votes and release the results of the "popular vote" pieces to be used as permanent additions in the upcoming game. This game will add to the 300 different versions of Monopoly that have already been created over the years. As Monopoly looks to enhance its customer experience, community bankers may want to do likewise by "looking right" inside the bank, as customers do.
What we mean by this is have you ever noticed that airport gift shops lean right? As author Malcolm Gladwell observed, shops that line the walkways leading to airport gates tend to have restaurants on the left and the gift shops on the right. The reason: to give gift shops a fighting chance. When shopping, people invariably focus first on their right, and it takes a strong draw to get them to turn to the left. Hunger pangs in an airport exert a pull strong enough to make people cross the aisle to the left, while magazines and trinkets do not.
As Gladwell notes, this right-leaning phenomenon has been studied and given a scientific name: the "invariant right". The natural reflex to look right derives from the fact that most people are right handed. This is reinforced in places like North America where we drive on the right. Retailers and designers have long been aware of this tendency so orient shops accordingly.
What does all this have to do with banking? With fewer bank branches around today, the design elements of a branch should be leveraged to attract and retain more customers. Lately, branch design has focused on retail trends. They feature layouts that cater to the interests of customers, with more open floor plans, colorful signage, and kiosk type teller stations.
As important as the various elements of modern branch design are, layout can help determine how effective they will be. This is where the "invariant right" comes in. One of the first considerations is what the customer sees on the right when they enter a branch. To test this, wander in yourself and look right.
What you should see is no single correct answer, since banks can have different focuses and customer bases. But, whatever is placed there, it should reflect a bank's best effort to appeal to and attract customers. Retail consultants and experts Rich Kizer & Georganne Bender call this a "power wall" - a display area that can create an impression or perception where new products or current promotions might be featured.
For instance, if the bank prides itself on its digital offerings, then a computer display to allow customers to sign up for certain services might be appropriate. If the bank prides itself on personal service, then perhaps a coffee bar goes there. Teller stations might be better placed on the left - unless a bank feels that its customers place especially high value on interactions with tellers.
Indeed, this quirk in human behavior seems to contradict what one might expect, which is that a person entering a store (or bank branch) would first look at what is directly in front. But it turns out people literally don't focus on what's right in front of them, no matter how tantalizing the display. Kizer & Bender call the first 5 to 15 feet inside the front door of a store the decompression zone, because it is the place where customers transition from outside to inside. It should be open and inviting, but should not be expected to be influential.
Optimizing your bank branch for the best customer experience is important to community bankers. To influence your customers, the key is to think about their needs now and in the future, because doing so the right way is much more than just a game.
Subscribe to the BID Daily Newsletter to have it delivered by email daily.

Yields tumbled 7bp as investors further digested the protectionist tenor of the inauguration with the formal withdrawal from the TPP agreement and expected renegotiation of NAFTA.

The CFPB has filed a lawsuit against TCF National Bank ($21.1B, SD) for allegedly enticing customers into costly penalties using illegal marketing practices. The CFPB called the bank's actions brazen, said its sales culture gave managers bonuses of up to $7,000 for selling overdraft protection that met goals, that the CEO had even named his boat the "Overdraft," and designed its account application process to obscure fees and make overdraft protection seem mandatory for customers. TCF has denied the allegations.

Citigroup Global Markets will pay a $25mm penalty to settle Commodity Futures Trading Commission claims that the company engaged in a trading tactic known as spoofing and for failing to supervise employees and agents. Spoofing is an illegal activity where traders place thousands of buy and sell orders and then cancel many of those orders milliseconds later. The trick fools other investors into thinking activity is growing on a given instrument and is illegal.

The CFPB has filed a lawsuit against student loan servicer Navient for allegedly systematically and illegally steering borrowers during repayment into forbearance when they may have qualified for other options, not keeping borrowers informed of critical deadlines needed to maintain certain eligibility, processing payments incorrectly that resulted in late fees, and sending improper negative reports to credit rating agencies. Navient called the allegations unfounded and politically motivated.
Copyright 2018 PCBB. Information contained herein is based on sources we believe to be reliable, but its accuracy is not guaranteed. Customers should rely on their own outside counsel or accounting firm to address specific circumstances. This document cannot be reproduced or redistributed outside of your institution without the written consent of PCBB.