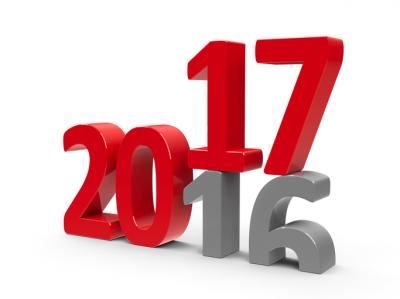 by Steve Brown
Share this Article:
As we wrap up 2016, we're looking forward to another promising year for community banks in 2017. We wish you all a prosperous and Happy New Year! It's time for our annual review of some of the most compelling events of this past year.
Banking: The biggest news was the almost 12% rise in net income for community banks in Q3 to $5.6B. During the past 12 months, loans and leases at community banks increased $128B or about 9%. These are both positives for community bankers. Next, no one can forget the Wells Fargo scandal that caused all banks to look more closely at compensation and incentive programs. As a result, regulators have been ramping up reviews, reaching into banks seeking additional information and looking closely at account opening procedures. Both the ICBA and ABA are suing the NCUA over its membership lending practices. The bank lobbies point to an ever expanding membership field as uncompetitive. Finally, the OCC announced it would allow financial technology companies (fintechs) to apply for limited purpose bank charters and many are reportedly standing in line now so this could be interesting.
Politics: Brexit was a shock to many and it will continue to play out in 2017, as the UK moves to officially exit the EU. Yet, despite its potentially large impact, the Brexit was not the biggest news of the year in politics. Instead, that title was held by Donald Trump, who successfully won the Presidential election. No matter your politics, it was shocking to probably everyone that someone with odds of winning probably in the 1% range at announcement, and against a full field of competent competitors, could end up on top. This was a major upset, but the good news for bankers is that bank stocks have soared along with the market, amid Mr. Trump's anticipated $1T in stimulus spending and tax cuts. In one final move before year-end, Italian voters rejected a referendum to limit senate power, driving the resignation of its prime minister. The new one will have plenty of work to do as they tackle a banking sector saddled with the most non-performing loans in the region.
Regulation: Bankers cheered regulatory changes that allow banks with assets <$1B and a composite rating of 1 or 2 to move to longer 18 month exam cycles. Cyber concerns were also in the air, as this popped up as the #1 issue on nearly every bank executive or regulatory survey, leading regulators to pass proposed rulemaking for enhanced cybersecurity risk management standards. Other areas of high concern: BSA, AML, quality of loan growth, lengthening of asset maturities, CRE concentrations and others.
Health: The year started off with the WHO announcing the epidemic of the Zika virus which caused panic. Although several became ill due to the virus, only 18 deaths were reported worldwide. By Nov, the epidemic was declared over. On a more informational note, we also learned that butter has been taking all the heat for heart disease these past years, when in fact the AHA warns that sugar can "substantially increase a person's risk of dying from heart disease". This new information may make some of us think twice about having any more holiday treats.
Apps: 20Ys after its initial introduction, Pok?mon reinvented itself and topped the best-seller game app charts with Pok?mon Go. This fad became popular with kids and adults alike as they outwitted each other to catch the Pok?mon monsters. It became so embedded into everyday life that people started walking into oncoming traffic looking for these virtual characters and one even walked off a cliff into the sea below. In social media, Snapchat became the top app for most young people, leading Snap Inc. to file for an IPO (valued at $20B).
Science: There were quite a few interesting scientific innovations and discoveries this year. Three of the most interesting perhaps are: 1) SpaceX successfully landed a rocket vertically. This technology will save time and lots of money once it overflows to government agencies like NASA. 2) Scientists in Iceland performed "carbon capture," where they pumped CO2 into volcanic rock and sped up the process of turning it into limestone from hundreds of thousands of years to just 2Ys. This could provide major benefits to our planet. 3) It was discovered that Earth has a smaller, second moon that is only 130-350 ft across.
Goodbye: This year we sadly said goodbye to famous people who passed away including: Astronaut (John Glenn); Mrs. Brady (Florence Henderson); Willy Wonka (Gene Wilder); Crotchety TV Host (John McLaughlin); Happy Days creator (Garry Marshall); King of the World boxer (Muhammad Ali); Purple Rain singer (Prince); Comedian (Garry Shandling); Cool Hand Luke actor (George Kennedy); To Kill a Mockingbird author (Harper Lee); Eagles singer (Glenn Frey); Iconic rocker (David Bowie); Professor Snape of Harry Potter (Alan Rickman); First Lady (Nancy Reagan); Supreme Court jurist (Antonin Scalia); Vintner (Peter Mondavi); Chocking Stopper (Henry Heimlich); Singing Legends (George Michael & Natalie Cole); Princess Leia (Carrie Fisher) and her mom (Debbie Reynolds). They will all be missed.
Technology: Artificial Intelligence (AI) has started to become an everyday word, as people rely more heavily on Siri, Alexa and others for weather, music selections, shopping and restaurants. In banking, we earlier reported on USAA's new AI assistant called Eva, which now has a friend in BofA's version (called Erica), due next year. Other breakthrough technologies from a list compiled by MIT include: genetically engineered immune cells that can save the lives of cancer patients; speech technology that makes it even easier to use a smartphone; reusable rockets; robots that can teach each other; and an online app store of DNA that makes information about your genes readily available so you can better understand your health risks and predispositions.
As you flip the page on your calendar, we wish you and your bank a healthy and successful 2017. We look forward to what this fascinating world will bring us to talk about in next year's edition.
Subscribe to the BID Daily Newsletter to have it delivered by email daily.