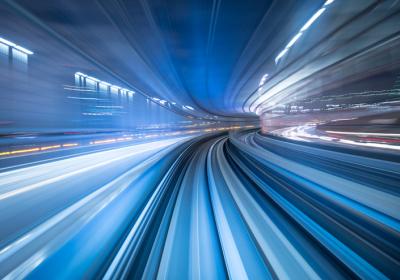 Many inventions come to light slowly but then pick up speed for a fast finish. The Internet is no exception. According to Wikipedia, the development of the Internet started in the 1950's with ideas of "packet networking" coming from various computer science labs from the US, UK and France. The first official email message was sent from UCLA to Stanford in the 1960's. Then, after the launch of the World Wide Web in the 1980's from research done in Switzerland, the foundation was laid and the Internet took off. While not as pivotal as the Internet itself, blockchain technology seems to be an innovation worth watching in its own right.
We have talked about blockchain technology in this publication before and that is because it is particularly interesting for banks. As billed, this ledger technology could handle zillions of financial transactions, reduce costs, improve delivery time and lead to buckets of cost savings.
It is estimated that the settlement costs of transferring money using blockchain overseas could save banks as much as 33% over current methods.
Blockchain could also overhaul the way loyalty rewards programs are managed. It would allow for both the real-time redemption and exchange of rewards points that individuals earn across multiple vendors, programs and industries - all without the need for third party administrators. According to a recent report on the topic from Deloitte, removing intermediaries from the equation would not only make it easier for organizations to securely run rewards programs, but also make it easier for small institutions, such as community banks, to provide customers with the same scale of similar programs currently run by major banks and credit card companies without major development costs.
These efforts are just a small indication of the work currently being done to make blockchain a reality within the banking industry. A recent survey from Greenwich Capital Markets estimates that organizations with initiatives involving blockchain will spend up to $1B in 2016 alone. Given banks and central counterparties are among the biggest beneficiaries of many blockchain efforts, the two groups have so far been among the most active investors in such initiatives. Among these organizations, Greenwich found that 32% of them have allocated more than $5mm a year to these efforts, with another 15% each having allocated more than $2mm per year.
For its part, the World Economic Forum projects 80% of banks worldwide will start blockchain projects in 2017. Pretty much anything that moves around in the financial world might be automated with blockchain so banks are looking closely to see how and where it might be used first and most effectively.
As efficiencies are achieved within the financial services industry using blockchain technology, the outcomes may be felt not only with the largest institutions, but also down to the community bank level.
As most things that are innovative in the technology world, once the wheels start turning something unusually pops out the other end that makes things faster and easier. We wonder if blockchain could be the next technology in line to see that happen.
Subscribe to the BID Daily Newsletter to have it delivered by email daily.

Research by the Society for HR Management finds the most common reasons companies use social media to recruit for jobs are: target passive job candidates who might not otherwise apply (82%), increase employer brand and recognition (77%), target candidates with specific skills (71%), allow potential candidates to easily contact the company about employment (64%) and target a specific job level to recruit (61%).

Research by the Society for HR Management finds: 43% of companies surveyed use social media or online search engines to screen job candidates.

Research by Fiserv finds 36% of those who do not use online banking say that's because they don't mind paying by check and 35% say they don't want to change either.

A survey of small business owners by the National Federation of Independent Businesses finds optimism climbed after the US elections to 98.4 vs. 94.9 prior. This is the biggest percentage move since 2009.
Copyright 2018 PCBB. Information contained herein is based on sources we believe to be reliable, but its accuracy is not guaranteed. Customers should rely on their own outside counsel or accounting firm to address specific circumstances. This document cannot be reproduced or redistributed outside of your institution without the written consent of PCBB.