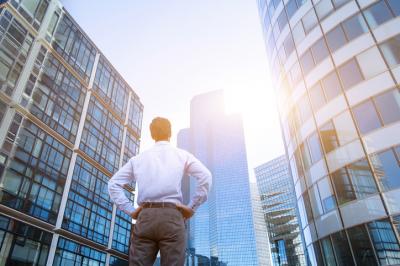 by Steve Brown
Share this Article:
Did you hear researchers in China have developed technology that can identify criminals? It reportedly looks at someone's face and after running millions of algorithms, can identify criminals with 90% accuracy. It apparently finds criminals have a 23% larger curvature of the upper lip than non-criminals and the distance between their eyes is 6% less. It would be really nice if banks could feed their loan portfolios into a computer, have it run some algorithms and then with 90% accuracy indicate which loans are most likely to go bad and which ones aren't.
Banks with heavy concentrations in commercial real estate (CRE) could especially use that right now. After all, credit rating agency Fitch recently warned that CRE valuations and lending trends are not sustainable in the medium term and banks should expect a softening in the sector.
This is worrisome to community banks, as Fed research examining the impact of CRE guidance of 2006 found "during the three-year economic downturn, banks with high CRE concentration levels proved to be far more susceptible to failure," so the alert by Fitch will undoubtedly sound additional alarm bells with banking regulators too.
Fitch reports that all of the most concentrated banks - those with more than 300% of risk-based capital in CRE - have less than $50B in assets and most have assets below $10B. That makes sense when you consider community banks do most of the CRE lending around the country, but undoubtedly, risk management here remains critical.
Fitch also reports that CRE lending growth has been particularly strong of late. The 1Y compound annual growth rate (CAGR) of CRE has been 3.7%, which exceeds GDP growth by a hefty percentage. As such, a pullback in the market at some point isn't very far-fetched.
While demand for CRE loans is still strong, there's anecdotal and hard data suggesting that a growing number of banks are starting to take a more cautious approach. This may be a reflection of heightened regulatory attention on CRE lending. Last Dec, federal banking agencies reminded banks about the need for prudent risk management in this area. They also highlighted supervisory expectations for banks and made clear that CRE lending was an area of specific concern.
Anecdotally, some banks have noted a pullback in CRE lending among their competitors. The latest lending data from the Fed supports the notion that banks are becoming more circumspect. Consider that 42% of banks indicated a tightening of lending standards for multifamily lending specifically during 3Q, according to the Fed. This is notable, as multifamily lending has been a primary driver of growth within CRE lending, posting a 1Y CAGR of 10.7%, according to Fitch.
Meanwhile the Fed also notes 27.5% of banks said they tightened standards on new construction and land development loans. Construction loans experienced the highest loss severity in the last crisis, Fitch noted, adding that the rating agency would expect a similar trend in the next downturn.
It's a good sign that banks seem to be taking such concerns seriously and are responding. It's also noteworthy that Fitch believes negative ratings actions for banks are premature, as that scenario is only likely when banks' losses and nonperforming asset ratios exceed the ratings agency's expectations and are out of whack with similarly rated peers.
Although the economic environment has taken an upwards turn with the election outcome, it's still an opportune time to review your portfolio and risk management to see if there are areas where tightening may be warranted. We hope that the CRE market continues to thrive for many years, but banks should be prepared and ramp up the analysis/algorithms in the meantime.
Subscribe to the BID Daily Newsletter to have it delivered by email daily.

Flying Pigs And A Healthy Opportunity

Research by Bain finds only 17% of older customers say they received any guidance or training from their bank on how to use its mobile banking app.

Research by the Global Internal Audit Common Body of Knowledge (CBOK) finds 83% of board members in North America say internal audit can improve its role in assessing and responding to strategic risks. Respondents felt that could be achieved by "periodically evaluating and communicating key risks to the board & executive management."

Research by Fiserv that looked at the habits of banking customers finds online users said they most commonly went there to check balances (79%), pay bills (47%) and transfer money within the same bank (41%).

Research by Korn Ferry finds 55% of financial and professional services leader respondents believe technology will generate the greatest value for their companies. That level is 7% above any other response.